Captain Khan, killed 12 years ago, was a hero, but this is about RADICAL ISLAMIC TERROR and the weakness of our “leaders” to eradicate it!   –  Donald J. Trump

Voters have the right to know about a presidential candidate’s health. In Hillary Clinton’s case, reports and rumors of her ill health have dogged her campaign. See: What is wrong with Hillary? Hillary’s health: her meds, thick eyeglasses, and what doctors say Hillary is dealing with mounting health issues, new book claims Best explanation for […]

via Is the hole in Hillary Clinton’s tongue from cancer surgery? Dr. Eowyn 3h ago hillary-clintons-health-problems — kommonsentsjane

Last evening some friends and I went to the St. Charles Family Arena (Missouri) for an Air Supply concert.   We were not disappointed, great show!   These guys sound as great as ever and haven’t lost their energy.  41 years together……..still performing all over, catch them if you can!

Editor: From time to time I post guest columns from readers. Although a few days late, this is a very welcome piece. I heard the interview live driving through South Dakota the other day and thought—you must all hear this! Thanks to reader Julia for being on the same wavelength and sending me her comments. […]

via Guest comment: Hannity interview explains why refugee flow so dangerous to us — Refugee Resettlement Watch

This article is a must read!   Wake up!

via Sanders: Trump doesn’t understand the Constitution — Everybody Loves Trump

That coming from a Socialist!

The Lecture:   I have not been corrupt for the last 40 years you morons, have I Bill?

History was made with the acceptance speech of the nations first woman nominated by a major political party for POTUS.    The Democrats at their National Convention had the honor.   But like everything else about the DNC, this just ain’t quite like it seems.  The Dems plotted, cheated and lied for this historic moment.   Bernie Sanders watched in disbelief.

Hillary Clinton, when she wasn’t trashing Donald Trump, spent the evening trying to convince a nation her 40 years of corrupt public service was only a delusion, that she is “good”  and we don’t really know the real Hillary Clinton.  Despite what we have always been told, seen and heard of the last 40 years that she was a victim of political and public service its a corrupt conspiracy against her. In one magical speech she tried to convince us all she is the Woman for the job, for this moment, because she is honest.  GAG!

You don’t wash out character of the past 40 years in one night.    She is still the Hillary Clinton we know.    Corrupt.    Great job DNC, the historic moment was a joke, a lie.  We needed the right woman, not this witch.

Celebrate the historic moment………..now back to reality! 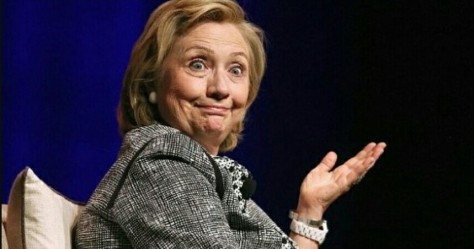 Tonight’s end to the Democratic Convention was just what was expected as Hillary Clinton spoke to her believers. These are the same people that have believed the same promises for years that rarely come true. Much of her new and improved policy promises include: Not honoring the Trans Pacific Partnership (TPP) that she fully backed prior to Donald Trumps stance against it. She suddenly has a new position on veterans since her statements claiming that the Veterans Administration was doing a fine job handling vets issues. She now uses Trumps position on vets. She claims the military is in great shape despite what is known, lack of equipment and personnel.
It was classic Hillary Clinton saying exactly what her audience wants to hear only to gain votes. How can anyone believe that Hillary would go after the Banks and Wall Street? These are her biggest donors. How can anyone believe…

Hillary Emails lost would expose the truth above.

Source: Bye Bye Middle Class: The Rate Of Homeownership In The United States Has Hit The Lowest Level Ever

Not the picture Hillary just painted!!