Regular readers of this blog will know that the Croatian Culture Minister Zlatko Hasanbegovic has had to endure incessant attacks since he was appointed a minister in the new Croatian government over his position as a historian on WWII Croatia. His views are severely criticised, painted as revisionist in the utmost of negative connotations […]

via Croatia: Accusations of Revisionism Denounced As Cultural War Waged By Post-Communist Elites — Croatia, the War, and the Future 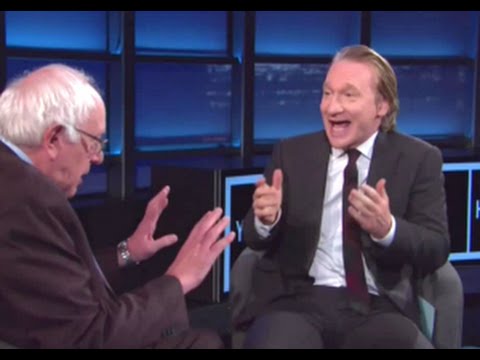 Bernie Sanders was interviewed or should I say stroked by Bill Maher on Real Time last evening.   Maher has endorsed Sanders; which is of no surprise; both are socialists.  Maher is a socialist, atheist Democrat.   Maher wants to help get Sanders elected.  (Frightening thought:  Sanders chooses Maher as his running mate).

It is obvious that Bernie is hanging around in the remaining primaries, leading to convention time with his fingers crossed that Hillary will be indicted or forced to drop out of the nomination process.   Forced out?   Don’t count on that, Hillary is too arrogant and delusional to quit.  There is a better chance of indictment than a drop out.  Bernie could have done more to help himself early on; make her answer questions and discuss her email situation rather than say “I am tired of hearing about your damn emails”.    There were/are a ton of issues Bernie could have pounded Hillary on but hasn’t.

Lets get back to Bernie and Bill (Maher not Clinton).   No difficult questions or uneasiness for Bernie coming from Maher…….he handled Bern with silk gloves;  set him up to look as witty as possible.   Bernie was more interested in taking on Trump than Hillary.   Actually both Bernie and the Donald pretty much ignored Hillary this past week; except for Trump stating “it was a bad week for Hillary”.    Bernie’s biggest rip on Trump was “he has no policy; he would be dangerous and an embarrassment”, but never said HOW.   Trump does have policy; Bernie just chooses to ignore.   Bernie said; Trump’s policy is absurd.  So, I guess he does have policy, he went from no policy to absurd policy.   However, leading to this point:  Bernie criticizes Trump for being absurd……then within one minute, and I mean one minute, the socialist stated “college education should be tuition free”.   Bernie, nothing is free.   Free for the student?   Maybe, even that is arguable.   Someone pays for it, someone pays for everything.   Tax payers!   Those students will be paying the higher taxes as well.  But that is what a socialist does……operates under illusion (and delusion).   Its like a magician on stage; you see it ……but its carried off with illusion; it isn’t what it appears.   We have plenty of that in government already.  Raising taxes on everyone for programs and then claiming that it is free to everyone is what socialist do.

The two socialists stage clowns then jumped on Trump for backing out of a Sanders vs. Trump debate!  Called Trump a chicken!   🙂   I have to smile.   Why would Trump take on Sanders in a debate?  Sanders hasn’t rid Hillary yet.  She with all her obstacles could still be the Democratic nominee.   Trump hasn’t had the opportunity to debate Hillary yet!   Now here would be great theatre:   a Bernie, Hillary and Trump debate.   That makes more sense than Trump vs. Sanders; to me anyway.   Bernie and Hillary could plot to gang bang Donald; but he has plenty experience against tag team debates.  I would venture to say; Donald’s campaign team talked him out of the Sanders’ debate.  There will plenty of time for Donald to debate Bernie and/or Hillary after the Conventions.

In the mean time, Trump will and should hammer both Hillary and Bernie at his rallies, interviews and ads.   Who is the eliminator here?   Hillary certainly hasn’t eliminated Bernie.   Bernie hasn’t eliminated Hillary……   If the democrats somehow remove Hillary, and don’t believe Bernie is electable as a socialist; will they as some are speculating move in Uncle Joe Biden?   That would be a possible scenario if the Dems don’t believe Hillary or Bernie (actually socialism) won’t beat Donald Trump.   That would in fact make Trump THE ELIMINATOR!

I find it interesting that with all of the possible attacks against Donald Trump Elizabeth Warren and Hillary Clinton choose to attack him for doing what he is supposed to do as a business man.

The say that he is cruel and heartless for buying up property at rock bottom prices and then selling it when the market improved.

Let’s forget for a minute the reports that the Clinton’s made millions of dollars doing the same thing or that Bill Clinton was instrumental in creating the environment that caused the real estate bubble in the first place.

Donald Trump makes his living buying and selling real estate. He would be a fool not to buy at the lowest possible price and then re-sell it at the highest possible price.  In short he has nothing to apologize for in making money legally.

Hillary on the other hand should apologize for selling…

Taking away guns, tools of self defense from responsible citizens means being defenseless against criminals and violent individuals.   Its as simple as that!

Source: This Is How Much Your Health Insurance Payment Will Surge

With Obama trying to write a law from the White House (usurping Congressional authority) states are going crazy attempting to keep up with the changes. There is a simple sign that can be placed at the general entrance to the restrooms which will enlighten all.