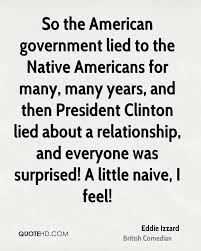 The sovereign Nations of Native American tribes don’t need anymore influence from the United States government and its Supreme Court.  That relationship has never worked.  Might not be a bad idea for the citizens of the 50 states either.

This is not an issue that should be raised outside the Native American nations, if it is to be an issue it will only come from within. Apparently it is not an issue. Leave it be!

Hillary Clinton, initiated the lie about the video being the cause of the Benghazi violence on Sept. 11, 2012; with the approval of Barack Obama and his administration from the White House. Read it here!

Every week seems to bring a new chapter of scandal for Hillary Clinton, the latest being that her email debacle is worse than previously thought.

Sarah Westwood of the Washington Examiner…

Hillary Clinton withheld Benghazi-related emails from the State Department that detailed her knowledge of the scramble for oil contracts in Libya and the shortcomings of the NATO-led military intervention for which she advocated.

Clinton removed specific portions of other emails she sent to State, suggesting the messages were screened closely enough to determine which paragraphs were unfit to be seen by the public.

For example, one email Clinton kept from the State Department indicates Libyan leaders were “well aware” of which “major oil companies and international banks” supported them during the rebellion, information they would “factor into decisions” about about who would be given access to the country’s rich oil reserves.

Click the link below and watch the video of the news cast. I’d hug this man. Actually, I wouldn’t mind having a cup of coffee with the man. I like people who know history. H.K. Edgerton, if you ever find yourself on this side of the state, the offer of coffee and conversation with this displaced Yankee stands.

H.K. Edgerton is a former president of the North Carolina NAACP and one of few African-American members of the Sons of Confederate Veterans. (Credit: WYFF)

“I’m not going to blame it on a Yankee because I’ve seen some southern folk around here that are real questionable too that don’t know anything about who they are and their families and the honorable people in the southland of America, red, yellow, black, white and brown,” Edgerton said.

He said the Confederate flag needs to continue…

We’ve had lots of rain here in Missouri lately, as have other states.   Last evening we had some severe storms and a funnel cloud or two in the St. Charles and St. Louis area.   The weather pattern lately made me think of the phrase “Its raining cats and dogs.”.    I wondered where the phrase came from, so I Googled it.

There doesn’t seem to be much documentation of where this saying came from for certain.   There are some different opinions.    The one that seems most logical for an illogical saying is that it came from England, possibly from a pub.   In the old days the roof of an English house was made of straw and grass, and that combination of building material would not hold water out well.   Cats and dogs would sleep on the roof tops and the rafters.  I can see how the cats got there, but the dogs would have needed steps, possibly to the rafters; or the houses were built into a hill or side of a mountain and the animals could just walk onto the roof.   However, they got there they got there.   When rain storms hit, the roof would give way and down came the cats and dogs.    Born is the phrase “It’s raining like cats and dogs.”.

News for the Revolution The US government has concealed the existence of some 14,000 images documenting the Central Intelligence Agency’s (CIA) network of secret “black site” torture and interrogation centers established after September 11, according to unnamed US officials who spoke to the Washington Post.

The existence of the photographs was known to the US military prosecutors involved in ongoing military commission cases against four alleged terrorists for at least several months prior to the publication of the media reports on Saturday, according to the Post.

The photos had never been brought forward during more than three years of hearings in the cases of Khalid Sheik Mohammed and three other alleged participants in the September 11 attacks.

After a brief attempt to conduct their trials in a New York federal court, the accused are again standing before military-run commissions established to deny…

Storms and funnel clouds in St. Charles and St. Louis area last night not enough to keep the Cardinals from sweeping Cubs.