Oh my! Oh my!   Donald Trump is right about Ted Cruz…….he is a massive liar.

I just listened to Cruz speak in Indiana, he twisted nearly every political stance of Trump, in an attempt to smear Trump with false statements and misrepresentation.   Cruz’s campaign tactic………lie!

Donald Trump would better serve his campaign by getting back to outsmarting Ted Cruz, rather than out whining him.

I agree it may not be a fair system, especially when registered voters have no say in a primary, caucus or convention, it is what it is; back room dirty politics.  Donald Trump can not change that, not right now anyway, learn to play the game.    Make a difference if and when you are elected.

The man running Trump’s campaign, Paul Manafort, should have been recruited from the start.   It has cost Trump votes, delegates.    Better late than never, but the guys work is cut out for him to reach the 1,237 magic number of delegates before Cleveland.

Manafort needs to do more than go delegate hunting, and this may be his greatest challenge, counsel Donald Trump.

I think Ted Cruz gets too much credit for all the conniving political trickery to steal votes or delegates, especially from the recent rumors.   Cruz is a slick campaigner, with a well organized campaign team.   But, can he really control that much of what happens in state conventions or caucus’ ?   I would think not, I would say most of any voter corruption lies with the local parties.    Cruz may have an influence…..but is he close enough to have that power?   On the other hand, the big, establishment bosses may have much to do…..about who wins what and does not!   The anti-Trump squad may have more influence than Cruz himself.   Regardless, politics is more corrupt and dirty than ever.

Mr. Trump, I can’t say I am an average Joe…….nothing really average about me; besides that sounds a tad bit demeaning.  Why would I lower my own ego, you wouldn’t.   That isn’t my advice; just letting you know where we are coming from.  We as in We the People of the United States.   We, who are important enough that you and the other so called candidates are asking, nearly begging for our votes.   You want some, would you like to see an increase in support?  Listen up!

Be different again, be different from the others; you’ve got some damage to heal.   Stop beating up on Ted Cruz, leave John Kaisch alone.  You have a bigger fish to fry.   You lead in delegates……it’s yours, if ever so slightly to still win outright.   Be more than presidential; that means nothing anymore, when current and past presidents have been poor examples of “being presidential”.   Be smart, that would be something different for the office.   Tell us what your going to do and how you are going to do it.   There are more issues than the WALL, but don’t lose sight of that.   Its okay to repeat yourself on the issues, in a positive manner, just expand on it……but speak about the issues, no not everyone will agree.  You lose more support by being an ass, than by having a different opinion.  I agree, show some flexibility; that you are a listener.  Get advice from knowledgeable people, not professional politicians.Speak, speak and speak some more……..but say what you would do, not how horrible everyone else is.   America will decide that for ourselves.  Keep it about you……and what you will do for America.   Go, ahead though, I know you need to slam someone; Hillary is your target!!!

Ted Cruz and the DC Madame? 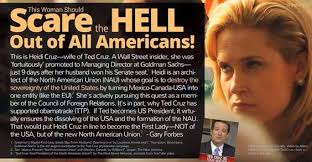 It certainly isn’t Heidi’s looks Trump or his campaign should attack, it’s her background, and she certainly has a very political history.   The CFR (Council on Foreign Relations is not what it sounds like, it is another One World Gov. advocate); Heidi was a member.

Heidi Cruz “is a Bush operative, she worked for the architect of NAFTA, which has killed millions of jobs in this country, she was a member on the Council on Foreign Relations who in Senator Cruz’s own words called a nest of snakes that seeks to undermine national sovereignty,” Pierson said, adding “she’s been working for Goldman Sachs, the same global bank that Ted Cruz left off of his financial disclosure.”

“Her entire career has been spent working against everything Ted Cruz says that he stands for,” Pierson said.

Either Ted is exactly what Trump claims to be, lies about his position on issues, immigration, borders etc…….   He isn’t in alignment with his spouse, from what he has said; or he is honest and Heidi was depressed and all alone on that highway because Ted booted her out of the house?  Heidi is in total contradiction of everything Ted supposedly stands for.

Ted what kind of rate did Sachs give you for that loan?

Ted and Heidi Cruz are more insider benefactors in Washington and Wall Street.   Trump is exposing that………in his usual way.

It didn’t matter that Donald Trump had nothing to do with former KKK member David Duke’s sort of endorsement of the Republican front runner.   Cruz criticized Trump, called him out to disavow the endorsement; not once but several times, including a debate.   Now Cruz wants the Donald to know his campaign had nothing to do with the PAC’s pic of Trump’s wife.   Doesn’t matter Ted, you should disavow it; shouldn’t you?    Don’t be a hypocrite Ted.  You are not immune from playing by different rules. There is something off with Jeb Bush, maybe that’s why he was knocked out of the Presidential race over a month ago largely by Trump and Cruz; the two he despised the most.

It isn’t the endorsement of Cruz that is weird this morning, its how he thoughtlessly announced.  First who does that in the early A.M. hours.   Is it the only time our low energy, low profile former candidate could find a mic. and camera?   Secondly, he couldn’t do it without bashing the Republican front runner?   That’s party unity!   That really illustrates Jeb’s political savy, or maybe he really is good with Hillary.  Jeb your disappearance from this race was the right road.

Jeb you confuse us!

Ted Cruz wants to make an issue of Trump canceling out on the debate next week. Cruz tries to make an issue of everything and anything.  First of all Teddy, its not a cancellation when you were never committed to participate in the first place.   It wasn’t exactly a long term scheduled event.  Trump wasn’t going to cancel a committed speech elsewhere for a last second, oh we need another debate.  Secondly, I doubt Trump is afraid to debate you as you claim, as you want it to perceive.   Its another sneaky snake lie.

Trump is right, another debater between Republicans isn’t needed.  There have been 11 or 12.   Besides Ted, you don’t want to debate, you just want another wrestling match.

I’ve been watching the body language and facial expressions of the 2016 presidential candidates with the exception of Hillary Clinton.    I can’t stomach looking at this corrupt, treasonous Democratic favorite daughter.  If the FBI and DOJ do their jobs the only path for Hillary should be a jail cell.

Enough about the Benghazi Witch, for now.

Body language, facial expression and unusual sounds from the mouth of Ted Cruz:   Often after Ted Cruz makes a statement, he gives us this smirky grin, sometimes with a puff of breath.  Its kind of a “take that you idiots………they’re buying my bull shit” moment.   He is snake like, sneaky; sometimes reminds me of a rat or weasel.   Not exactly reptiles and rodents you want in your back yard.  If you live in Karl Rove’s Redneck Missouri, you don’t want them preying around your hen house or barn.  Yes Redneck, Rove’s words, we’re not just a state where Ferguson is located.

There is something very unsettling about Cruz, maybe that is why he has so many enemies on both sides of the aisle; few if any political allies.  To be frank, I don’t trust him.  I am not sure I have seen anyone twist facts about others to make them appear like lies better than Cruz, then you get the smirk.   That’s what snakes do, remember the one in the Garden of Eden?   Don’t trust the snake.