Iran is paying Taliban fighters $1,000 for each U.S. soldier they kill in Afghanistan and $6000 for each vehicle.

What did Obuma do? Sent Iran $150 Billion in cash in the middle of the night. (HotScot9)

Sputnik – February 29, 2020 Negotiators from the United States and the Taliban are meeting in Doha, Qatar to sign an accord that envisages the timetable of the US withdrawing some of its 13,000 troops. The Taliban, in turn, is expected to sever ties with all extremist groups and prevent the territories of Afghanistan from […]

Scan down; see the pattern?   I guess this isn’t a red flag for the FBI either?

CAIR, their goal is Muslim domination of America, to be the only acceptable religion (government); actually in the world.   In America, it starts at the desk of Obama. 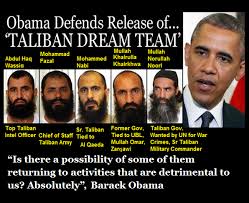 Now, if you are the President of these United States, and you had just released 5 Taliban leaders from prison for terrorist activity – would you want your Attorney General to announce that he would like to create a new task force on the threat of homegrown terrorism?  Then, not long after their release the man who occupies our White House admits they could participate in future terrorist attacks.  First of all, Dah on that.   Of course they will,  their terrorist leaders.   Obama didn’t give them up to the Pope for religious rehabilitation.

Obama, opened the door for future terrorist acts.   Gee, I doubt that their hard hearts softened while they served their hard time.   Obama may as well have had a Taliban strategy meeting with his 5 buddies, then opened the door and said……”Go ahead boys, have at it.”  So, Barack, when it happens you carried out your part.   There, Mr. Eric Holden Jr., you can start there with your task force against homegrown terrorism.   When you get your force in full swing and have more opportunity to spy on all of us, don’t forget to bug the White House.

I don’t have any problem whatsoever, with doing what it takes to prevent terrorist acts and bring to justice those behind killing innocent people.      But don’t just look in one direction………when the threat against our national security may also reside in Washington D.C.