Are the liberals, media, anti-Trump and never-Trumpers constant criticism of the POTUS a Coup attempt using a psychological method similar to Stockholm syndrome?   Keep repeating the criticism, and sooner or later even Trump supporters will come around to their side, some will; Republicans that have no back-bone, which would make up nearly all those in Congress.   They’ll just flow whichever way they think the tide rolls.

Stockholm syndrome: psychological response wherein a captive begins to identify closely with his or her captors, as well as with their agenda and demands.

Trump has a history of disavowing racists, the KKK, white-supremeist…….etc. etc. etc.; which the media and never-trumpers ignore.   A recorded history.   This is the same media that ignored Obama’s love for radical Islam.

An opinion from the Arlin Report………  Have lovely day! 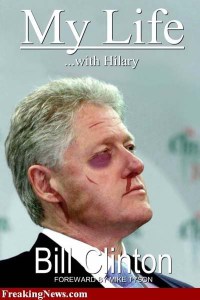 It finally hit me.   I have been racking my brain to reason why so many would follow an habitual liar, unethical and criminally minded individual.  I am speaking of Hillary Clinton, the Democrats choice for POTUS.   It’s a sick love affair.

There is only one logical answer: Stockholm Syndrome.  Nothing else makes sense.