Things seem to be getting back to normal in St. Louis. (Arlin comment)

ST. LOUIS – Police are investigating multiple shootings in the St. Louis area that took place early Sunday morning. There were numerous incidents in which a total of 13 people suffered from gunshot wounds. Of those 13 people shot, 3 were killed. Police say a man was fatally shot just after 12:20 a.m. Sunday at…

St. Louis Police Chief Sam Dotson reports that an uniformed officer on the force for 16 years was ambushed by four individuals while sitting in his personal car in the  Central West End.  A silver or gray new model Ford Taurus/or Focus approached the officers vehicle.  A man wearing a bandana over his face got out of the passenger side and opened fire on the officer, hitting him in the upper torso.  The officer was wearing a bullet proof vest.   The officer was not seriously hurt and is expected to be released from the hospital this morning.

The officer was hired by local businesses.   He was observing a couple of individuals walking when they were joined by a third man, then a forth.   They all got in the silver/gray vehicle then pulled up directly in front of the officer’s vehicle, and opened fire. 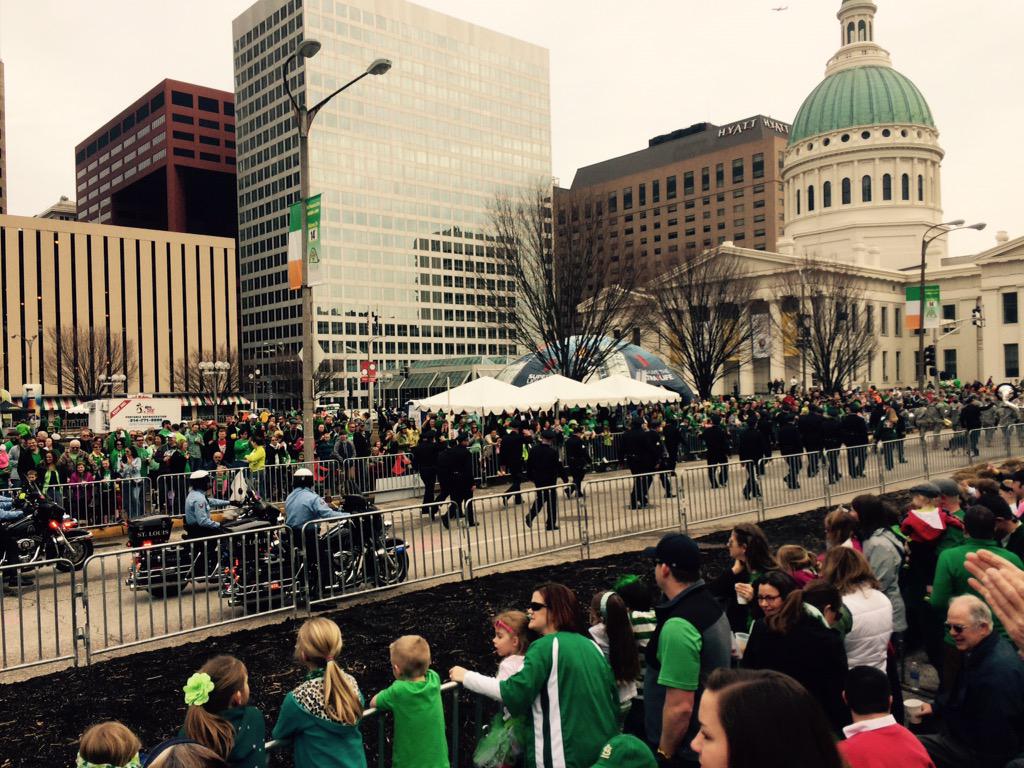 The St. Lois Police were right up front in the parade marching and riding police vehicles.
The St. Louis crowd gave them a standing ovation.

Thank you Jim Hoft for sharing this information and photo.

With all the problems viewed nationally from nearby Ferguson, the nation needs to see the real St. Louis.

Here is a safety tip and it makes no difference if you are black, white, asian, hispanic or from the freaking moon:   If you are already under house arrest and wearing an ankle bracelet and your court date is set, if you go out (which you are not supposed to do) it may not be a good idea to run when you see a cop because you are carrying a stolen gun.   You may not want to approach the officer  in an aggressive manner then get into a scuffle which could only expose the stolen weapon.  By now if you are stupid enough to get this far, you create an even more severe problem for yourself if you pull the gun and shoot at the officer.   There is a good chance if you haven’t killed the officer, he is going to shoot back and may end your life.   That my friends is not racism; the cop could be white, black, red or yellow for that matter and it would make no difference, they will shoot back.

Vonderrit Myers Jr. was arrested back in June for unlawful use of a weapon and resisting arrest.   The 9mm Ruger that was found at the scene of the shooting on Shaw Blvd. in south St. Louis Wednesday evening was stolen on September 26th.  Obviously Mr. Myers didn’t learn a damn thing.  I can’t say it any other way, it was total stupidity on the part of this 18-year-old to repeat what he was already in serious trouble over.   Myers placed himself in this position to be shot and killed by a St. Louis police officer whether he was on or off duty.

The officer was off duty but was patrolling the neighborhood for a private security agency.   He had every right to pursue 3 men if he suspected anything, the fact they ran only increased suspicion that something was wrong.  It doesn’t take a genius to figure that out.

Myers was under house arrest, he had a stolen weapon, the officer suspected something.   What do you want from your officers……someone that is alert, or one that is inattentive?   What was Myers doing with a stolen gun……..what were his intentions?  There could not have been any good intentions.

To read more go to the following link: