No Inspector General during Hillary’s time as Secretary of State?  How convenient is that?  Corruption runs free!    Obama never held her accountable or responsible.

We, with the assistance of Wikileaks, are beginning to see why Hillary Clinton did not want to release the contents of her highly paid speeches to Wall Street.   What she tells Wall Street and her financial contributors are not the same.   We the People are just peasants!

I have a question I would like the media to ask Hillary, possibly at the next debate:   We now know Saudi  Arabia and Qatar are funding ISIS and they have contributed millions to Hillary Clinton.   Six Billion dollars ($6,000,000,000.00) is still unaccounted for while Hillary was Secretary of State.   Hillary, did you pass that 6B on to ISIS as a good will gesture/favor for all those foreign donations you received?

I remember those years in the early 1990’s when America was hit with a big recession and from business people to working hard citizens everybody was trying to find a way from not going under and losing everything. I remember when there was talk of Donald Trump being in trouble financially and I was wondering […]

via We The People Already Know Hillary Clinton Has No Shame: She Is Now On Her Constant Attack On Donald Trump’s Capitalizing On His Net Loses in 1995 Yet She Has Done Exactly The Same — John A Pappas

As difficult as it is not to become numb to each new bombshell revelation about former Secretary of State Hillary Clinton’s shady practices, we remain committed to seeing that word gets out about them to expose the would-be president for who she is. Today’s bombshell is notable, among other things, for the fact that it was dropped […] 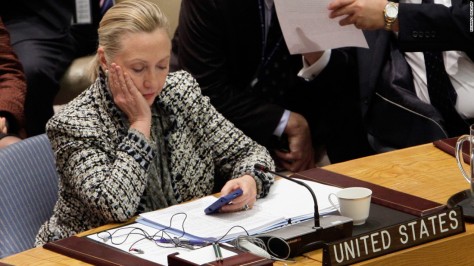 The office of the president of the United States was once considered the most powerful office in the world.   I am not sure that is still true.   Obama, is not respected, as even enemy leaders have little respect for an apologetic president.  If you throw your own people and history under the bus, you wouldn’t hesitate to throw an ally under.

Hillary Clinton is a power thirsty………well lets live at that.   We have heard her lie after lie, and scandal follows her like a new born duckling.   The abuses as Secretary of State are still under investigation, while First Lady……too much to mention here.   We’ve all heard of them.  It gets old beating that same drum, because of a nation where leaders are held unaccountable.

To me, Hillary Clinton back in the White House, as leader of the free world, or I should say the United States anyway, is inconceivable.   The abuses, and her disrespect for not only the office she once held and disregard for Americans and foreigners is unmatched.   She is not in it for public service, service to our nation or to make a better world…….it is power.   It is frightening to think how she will use the power of the U.S. presidency.   She will inflict chaos, as she has as Secretary of State, just for a show of power.   She has no conscious; which makes her dangerous, very dangerous.

Hillary says she made a “mistake” using private email and that she is “sorry”.      That is not an apology!   That is an habitual liar in a state of desperation making a half-baked attempt to deceive the public, voters.  That is what Hillary Clinton thinks of We the People, that we are stupid enough to believe she is speaking from the heart.   Most of us know better, Hillary R. Clinton has no heart.  Her campaign for the presidency is losing its pulse.

Hillary is sorry, she is sorry she got caught.   She really believes she did nothing wrong, or just doesn’t care that it was wrong.   It’s the Clinton way.    Hillary believes she is above everyone else.   She wants us to believe that what she did was “allowed”.   Her words.    So, Hillary if it was “allowed” why say it was a “mistake” and that you are “sorry”?    To paraphrase:   “The world was in such a mess when I stepped into the Secretary of State’s office, I wasn’t thinking about what I was doing, with the email thingy; it was allowed.  I was saving the world.”

Amazing, that someone with such low regard for Americans and evil in her bones is campaigning for POTUS.  How can anyone be so arrogantly stupid!   She is counting on US being as dumb as she is.   An extension of Obama!  We have repeated history enough, don’t you think?