Bloomberg is spending millions (could end up being billions) of his own money to move into (buy) the White House in January of 2021 (Nov. 2020 election) OR NOT! If Mike Bloomberg wants to waste millions of his own money, that’s his business. However, when he starts spending ours that’s our business. If Bloomberg is so willing to waste his money like this (almost bottomless pit); how much of OUR money will he waste?

A note to the President: Mr. President, rather than reassigning Lt. Col. Vindman from the White House, why not just have him shadow the Secret Service and carry your luggage.

Originally posted on 70news: ? Secret Service agents reportedly interviewed actress Kathy Griffin for more than an hour on July 4th over her controversial decapitated Donald Trump photo. Dmitry Gorin, Griffin’s attorney, has claimed the comedian was merely exercising her “First Amendment rights to tell a joke” he told The New York Times. “When you…

During a speech in Reno Nevada a Clinton thug named Austyn Cites (University of Chicago Graduate) attempted to rush the stage and attack candidate Donald Trump. The crowd and Secret Service intercepted the attacker and Donald Trump was briefly rushed off stage:

The FBI, and Secret Service should monitor Hillary’s whereabouts; make sure her planes do not leave the country.

There is nothing Hillary has ever done that she didn’t receive something in return!   No, she has done very little, if nothing at all for America.  Her accomplishments are pretentious or they belong to someone else; taking credit where no credit is due and never held accountable for her blunders; which there are many.

Every path Hillary has taken, has led to money and power; nothing else matters.  You don’t matter, America does not matter; hell even Bill does not matter.  Get in her way and you could end up in the trail of bodies.   It’s all about Hillary.

Hillary is a professional globetrotter.   She runs where the money is; Saudi Arabia for one.   She isn’t a deal maker; she is a trader………and a traitor.  She trades favors for money, it matters not the influence on America…..traitor.  Hillary likes to call the foreign funds coming her way “donations”.    The money trades are purchases, Hillary has been bought, by many.   They put up the dough now for the favors that would come later.   This is why so many, the Illuminati, the One World globalist will do whatever it takes to push/slide Hillary into the White House; they have too much invested……millions maybe billions.   Team Soros of which Hillary is a major player.

Lets just push aside a lifetime of scandals, corruption, murder rumors (or better, accusations with significant coincidence) and daily lies for the moment.   Hillary will implode often and away from the camera is incapable of holding it inside…..exit the explosion.   Ask the Secret Service, or anyone in the White House during the Clinton previous residency.    Hillary treats everyone like they are trash that needs to be taken out and buried in a landfill.   All you are good for is to serve her; but she’ll treat you like the deplorable you are.   Slave owners treated slaves better than Hillary treats……well, just about everyone.   She’ll smile and hug as long as you are handing her a check.

Donald Trump certainly has had his share of gaffes and less than desirable moments.   He has at times been insulting.  The media and the Left have twisted everything surrounding Trump as being racists; which is the vision they want planted in the minds of Americans.  Makes me wonder why the Democrats try to make him look like a Democrat.   No, the Donald is no saint or angel; but one thing is certain, he loves THIS country.   Hillary would enter the White House with rants and raves, screaming orders and ass chewing.   Hillary doesn’t want to be bothered.   You won’t see Girl Scouts getting their picture taken with the Hill in the Oval Office.   She won’t want to be bothered, unless of course you want that photo-op that will only cost mom or dad $2,700.00.   Hillary has a price tag on everything.  Hillary would be constantly hit with request, demands and just anyone’s time…… I can hear it:  “I’m not seeing that f_ _ king bastard.”, “Get those brats out of here.”.   No, Hillary won’t be able to handle the constant traffic and calls; especially at 2:00 in morning; without exploding…….which would be often.   No, Hillary does not have the stamina, the temperament for the Oval Office.  I wouldn’t put past a nervous breakdown. Now you can add in all the scandals, corruption, murder accusations and daily lies.

“Me and the Shit Kickers will be there in a minute.”

Hillary Clinton has stated that words used by  Donald Trump (his comments regarding Mexicans) is the type of dialogue that could cause violence such as that in Charleston, SC.   Former president Bill Clinton’s wife and presidential wannabee went on to say:

“I think we have to speak out against it,” Clinton added. “Like, for example, a recent entry into the Republican presidential campaign said some very inflammatory things about Mexicans. Everybody should stand up and say that’s not acceptable.”

HILLARY CLINTON IS THE BIGGEST FREAKING HYPOCRITE OF ALL THOSE WHO HAVE ANNOUNCED THEIR CANDIDACY FOR PRESIDENT.

This is the same woman who referred to Secret Service Agents assigned to protect her as “Shit Kickers”.   This is the same woman who pretends to be the CHAMPION of the Middle Class, but wouldn’t give anyone she deems as being beneath her, which pretty much takes up everyone on the planet with the exception of those with their checkbook open, the time of day.   If she would call Secret Service Agents “Shit Kickers” how do you think she talks about others when the camera is off?   Hillary Clinton has absolutely no respect for most of the human race, and she could careless about all you Hill lovers that are going to vote for her regardless.   She thinks you are idiots…….and she is using you.

Hillary once referred to the Secret Service Agents assigned to protect her sorry ass as Sh_t-kickers.   Is Hillary turning into a lowly sh_t-kicker herself?   I think maybe!   She said it: “It’s enough that I have to see you shit-kickers every day, I’m not going to talk to you too!”  Who is the real shit-kicker here? 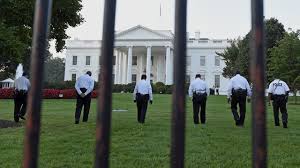 White House had a fence-jumper recently, Obama not at home. Playing golf?

Looks like the White House has more security than the consulate in  Benghazi where they had a severally dangerous atmosphere.   With the breach of security by a fence jumper, if the situation turned critical, would the Secret Service have gotten a “STAND-DOWN”   order had they needed to take action and called for help?   I doubt it, the National Guard, Army and anyone in uniform would have shown up with plenty of weapons.

Our embassies and consulates everywhere in the world deserve the same protection/security as we give to the White House.  Every official should be treated with the same respect that the president expects.