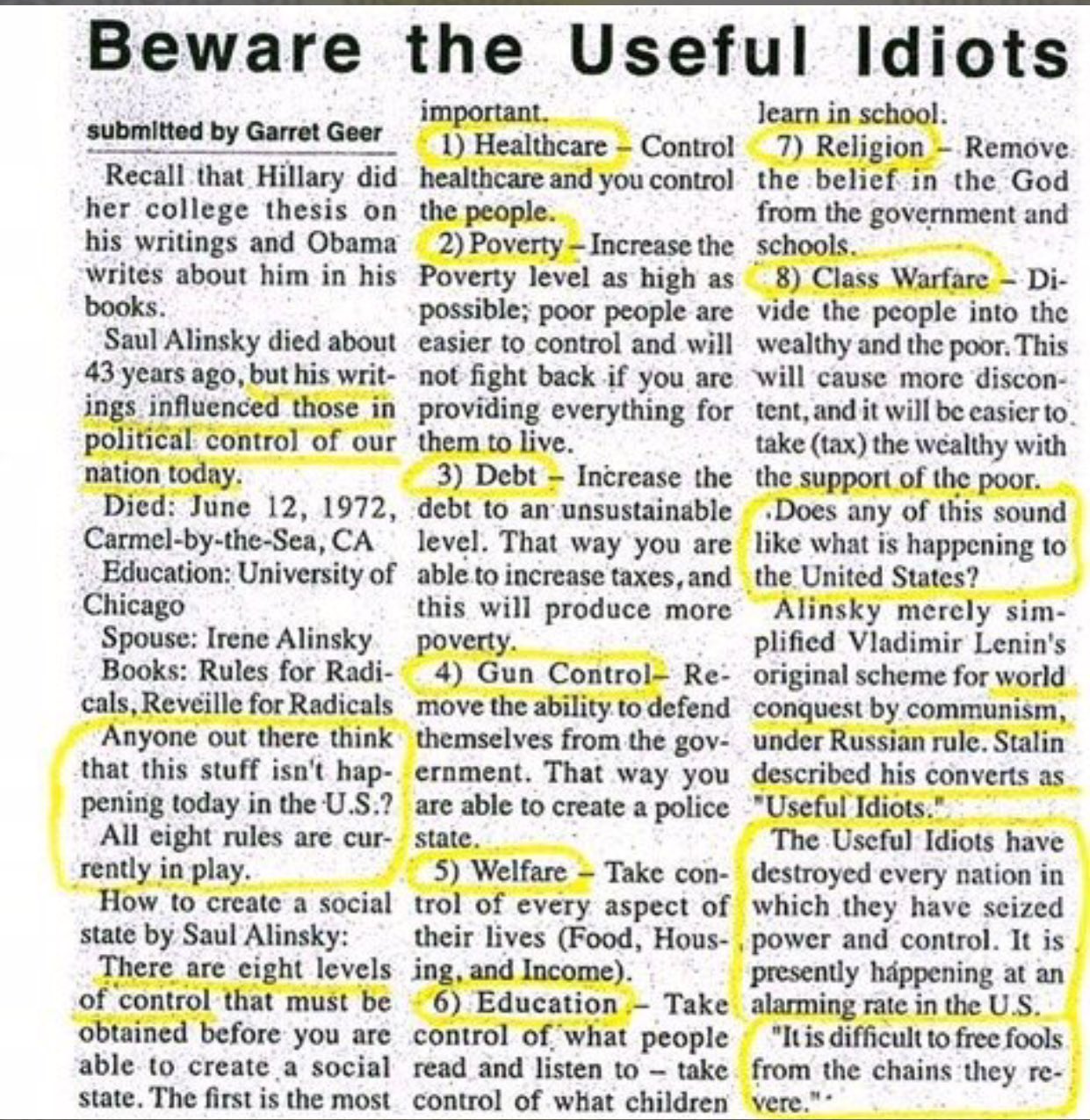 Everything Hillary and Obama is dirty, they were taught well.  They follow the Alinsky political scheme of conquest and control.

There could be a lot of “or maybes here’.

Which made her perfect for an Obama type Secretary of State, someone as corrupt as he.

Or maybe, he doesn’t believe his own words.

Or maybe the characteristics he describes in Hillary really helps him pull off his agenda of globalism and the destruction of America, creating a 3rd world country.

I believe Obama’s description of Hillary Clinton is spot on.   So, why did he appoint her Secretary of State and why does he campaign on her behalf for POTUS?   Answer: they are mirror images of the other and Obama knows Hillary will build on his legacy and continue their mission; a George Soros and Saul Alinsky mission.   Obama and Hillary are puppets.

Saul Alinsky, Hillary Clinton’s mentor would be proud of his student and the Democratic Party.   They have followed his instructions well.   Promoter of fraud and corruption a perfect 2 word description of Hillary and HER PARTY.

Every single item above listed by Lincoln are conditions the Council on Foreign Relations pushes, especially against the middle class in the United States.   They are about a two class society, upper and lower, created in part by division as in racial divide.   In politics, we have the Left and Right, known as Democrats and Republicans; but how much is just show…….anymore it is difficult to tell them apart.  They really do seem to be on the same team,  just not our team, not We the People, we are peasants to them, future servants.

How do politicians gain so much power?   A virtual unknown gets elected to the United States Senate, sits on his ass accomplishing nothing and keeps his mouth shut, for the most part.  He demonstrates he can take orders, direction from, from where?  A Think Tank, which is what the Council on Foreign Relations likes to refer as itself:  thinking of making this a better world, in their eyes of course.    It didn’t hurt that this puppet was a disciple of Saul Alinsky, a Marxist community organizer.  Barack Obama, was the Manchurian Candidate, then the perfect marionette in the White House.   How does someone with little history, none that could be easily traced anyway, and one who can not present a legitimate birth certificate become President of the United States.   He had a lot of support, approximately 4,900 members of the CFR type of support. An organization that may have more accumulated wealth and power from its members than any other in the nation, one of the wealthiest in the world.

A New World Order, with a One World Government and One Monetary System is the main goal of the CFR.   Barack Obama fit their agenda perfectly, he follows direction, he could be their Front Man.   He is bold enough to make executive orders, will keep the border open, advocate of amnesty for illegal immigration, will shrink the military, will be cautious on military strategy against pretentious enemies and threats to the American people.   Why this dude will do everything to drag America down to an inferior nation.    It is not out of the question all the superior human members of this Think Tank, who knows what is best for us, got Obama elected and re-elected.   Money is power is it not?  You ask yourself, how did he get elected when I can’t find anyone that voted for him?

How is it that someone who has scandal after scandal and accusations of crimes……lie after lie (and absolutely caught in them) wherever she goes, even think that she can be elected President of the United States and is entitled to the office?   By the way is it a coincidence that Hillary Clinton is also a Saul Alinsky disciple?   Hillary Rodham Clinton is a member of the Council on Foreign Relations.  She is in the club!   She will also do anything to get elected.  Anything!  The CFR will do all it can to help her out.   She fits their agenda, and will pick up where Obama leaves off.

Hillary has even stated the Council on Foreign Relations rules the United States.   She may be right, nothing gets done in Congress, except collect salaries while they put on their stage show.

Enjoy your freedom.    We could all do more to keep it!

The blood is not their blood, but that of four Americans that they did not protect or support.  There has been greater outcry over Ferguson than Benghazi; that is disturbing.

I would bet, that if either Barack or Hillary (wow sounds like a couple doesn’t it; wonder what Bill or Michelle think?  Bill might get excited.) so much as got a scratch, they would cry like a colicky baby.

Thinking about becoming a diplomat or foreign ambassador representing your country?   Ambassador Stevens loved his country and was proud; that is the way he felt as he was relaxing in his room at the consulate in Benghazi before it was attacked.   I can only imagine what went through his mind, when he/they ask for help for more security but were denied not once but three times.  I wonder what he would have thought had he still been alive when the security he had been ordered, to “stand down” and not proceed to the location of the ambassador.

Would you want to be in this position knowing you did not have the support of your president or state department led by Secretary of State Hillary R. Clinton?   Really, think about it just for a moment America………..would you want in that position with their lack-of-leadership?  No leadership; they are followers.  They are following their mentor, Saul “I want to destroy America” Alinsky.  They are like worms, crawling on their worthless bellies, low lives.  If you think I am being overly sarcastic…..okay, but I have no respect for either Hillary Clinton or Barack Obama.   They are the enemies of this country.   ISIS has done nothing compared to what this pair has brought on our country.

Barack,  and I am sure Hillary as well, love it that there are plenty of other distractions which they hope keeps America’s mind off the tragic yet preventable attack on our people in Benghazi.

I and many others just like me, and there are many, are not going to allow the events of 9/11/2012  in Benghazi disappear until Obama and H. Clinton are held accountable.  NEVER!  BARACK AND HILLARY,  IT ISN’T GOING AWAY.   I realize you won’t be looking over your shoulder, neither of you has a conscious.   Your names will forever go down in history as being associated and responsible for the deaths of four Americans.