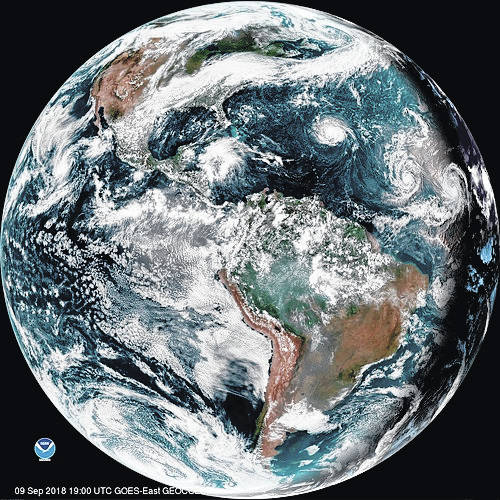 We, my significant other (and I say that with great respect) and a couple of friends, started planning our golf vacation to Myrtle Beach (actually we WERE to stay at Garden City, a few miles south) beginning back in January.  We left early Friday morning, Sept. 7th and arrived at our destination Saturday late afternoon; after stopping for the night in Hendersonville, NC.   At the time of our departure, Hurricane Florence was well out in the Atlantic, headed in the wrong direction.   There was a chance Flo, (as she was so-called) would curl north, and stay out at sea.   But, as luck would have it, by Monday we were made aware there would be a mandatory evacuation order (first by the condo management group) for Tues. by noon.

After spending Saturday and Sunday, in Florence, SC (no relation to the Hurricane), playing at the Country Club of South Carolina, we returned to Garden City.   We spent the evening at my favorite dining place in Murrells Inlet, Drunken Jacks.   They still have the best hush puppies on the planet.  Tuesday morning, we left SC at 4:30 AM to beat the evacuation traffic.  The traffic was heavy, but it moved; until later in the day when they reversed the traffic lanes coming in to going out.

We made reservations at a nice hotel (the Hyatt Place) in Birmingham/Inverness, Alabama.   We were determined to play golf on this vacation.  We booked 3 tee times over the next 3 days, with beautiful golf courses in the Birmingham area.   We refused to let FLO destroy our vacation, though disappointed we could not make our tee times with the 4 Myrtle Beach courses we had long ago set.   However, we did not feel sorry for ourselves or overly disappointed, missing tee times is small compared to the destruction, what now was a tropical storm, would leave in her path.   Anytime we were near a TV, we were glued to The Weather Channel, praying the friendly people we met and those that make their living on the east cost would be safe.   Rebuilding they can and will do.   Lives lost can not be replaced.

This was the first time I had ever experienced a Hurricane, though we left at the right time, when only the tides were higher, you could sense its path would find its way there.  We learned a lot, don’t mess with Mother Nature; some do.  While there, the good people of Myrtle Beach only wanted us to be aware what might be; it’s apparently bad luck to talk about it, just prepare.

It could have been worse, it can always be worse.  Myrtle Beach, Garden City, Murrels Inlet, South Carolina and North Carolina will recover.   They always do!

We’ll be back, just not in September!

The Tequila Bar & Grill is in Hendersonville, North Carolina.   I have been there but just once.   If I ever pass through there again, it’s where I’ll be for lunch or dinner.  Excellent!

The restaurant has a great atmosphere, friendly servers, and the food, OMG the food. I had a Chicken Chimichanga…..it was almost too pretty to eat.   I managed!  The Margarita’s are terrific, mine on the rocks with salt.   A girl made a fresh dip of guacamole for us (for just a small tip),  a full bowl that would feed 6 people, it was the best ever!    Couldn’t finish it, but had it boxed, of course!

I highly recommend the Tequila Bar & Grill in Hendersonville, NC.