“Potus wants to know everything we’re doing.” Lisa Page, FBI lawyer, text to lover Peter Strzok, FBI special agent, on preparing talking points for then FBI |Director James Comey to delver to Obama – 9/2/16. Obama’s words: “You’re going to see me early next year, and we’re going to be in a position where we […]

KOMMONSENTSJANE – THE DARK SIDE OF OBAMA’S ‘FALLING STAR.” Changed the heading for truthful purposes. — kommonsentsjane

Obama was only informed about what the FBI was doing, he endorsed it, instigated everything.


Read between the pictures……..not the lines. Or maybe we should have been doing both. 🙂

Corruption in the FBI is nothing new. If J. Edgar Hoover could drop down from heaven or rise from the depth of hell, if he were honest he’d tell you that. Or ask Martin Luther King Jr. ………Hoover illegally monitored Dr. King.

James Comey and Co. (FBI boys and girls that played along with Comey), which includes Mueller set up/framed Gen. Michael Flynn. Flynn accused of lying……… Comey lied……protected a guilty Hillary Clinton (of who knows what all, emails just a fraction of crimes). We should be taking a very close look, play back Comey’s testimony before Congress. NOTHING BUT BS.

The crimes of James Comey and his corrupt gang of FBI boys & girls were far more serious than anything they charged Flynn with and TRIED to convict him of. They were willing to destroy a man all of which was a part of the coup to remove Donald Trump……..as the love birds sang out.

(THE ARLIN REPORT THOUGHT(S) OF THE DAY : COMEY’S CRIME FAR MORE SERIOUS THAN ANYTHING THEY TRIED TO CONVICT FLYNN OF)


Yep, she said it today. She has said it before. But, Nancy Pelosi is a hypocrite. If she actually believes “No one is above the law”. Hillary Clinton would be in jail. James Comey would be on trial, headed to jail. Those are just a couple of high profile examples. Most in congress believe they are above the law. I can think of a Muslim law maker that married her own brother. Fraud. There is a lot of FRAUD in Washington D.C.

Oh and Joe Biden, after giving your little televised press conference to bash Trump today about the Ukraine thing(s), I’D WALK AWAY FROM THE PODIUM WITHOUT ANSWERING QUESTIONS TOO!

This impeachment inquiry announced today by Pelosi is mostly about 2020. This is political strategy being launched by the Speaker.

When they investigate Trump on the Ukraine during impeachment, they’ll have to investigate Joe and Hunter Biden on the Ukraine as well. Hunter got a nice pay check (or cash possibly), without any knowledge in the gas industry. NONE! A nice little benefit awarded Hunter following VP Joe’s (daddy’s) arrangement with the Ukraine.

I know this for a fact: The deeper you go into an underground coal mine the darker it gets. Just when you see, feel and experience the darkness and think it can’t get any darker…..it gets darker. I know this because I worked in an underground coal mine for 3 years. Parallelism with the Deep State, known as Washington, D.C. Your government my fellow Americans, you know those that govern, rule and create laws that only apply to us peons, us commoners, lowlifes, We the People that Hillary said “Americans aren’t capable of making decisions for themselves, we (I) must make them for them because they are too stupid ” (not her exact words but point made). The Deep State is real, it is a dark hole, a deep, dark and cold place in our nation.

I know this is very early in the Inspector General report, but are we once again seeing a different tier of justice for those Deep State lifers? Apparently, as of now former pathetic FBI Director James Comey will not be charged with leaking classified/confidential information (especially those memos he kept safe in his house on Donald Trump as President Elect and as sworn in POTUS). I understand that breaking Bureau policy, criteria, rules are not necessarily criminal offenses, despite taking “oath of office”. Yeah, “oath of office” means nothing anymore, not in this life anyway! The shame of it all! Comey knew he was violating policy, and he was on a mission to keep Trump out of the White House. Comey was instrumental in a coup to remove Trump the moment he took his seat in the Oval Office (especially if Trump fired him). ABUSE OF POWER in the very least!

The Deep State is darker and in this case colder the further we go! The sad part, and the part Americans better get a grip on and do something about is: It’s bigger and wider than we think. Are those people in power, elected, appointed and this includes the investigators (and those investigating the investigators) part of the Deep State? Do you really know who you can trust? They protect one another. There is dirty laundry all around us! Washing and bleaching won’t get rid of this bureaucratic stench. Gather them up and burn them. It will take drastic change! Washington bureaucrats have one purpose, to serve and protect themselves, not to serve our nation. Start with term limits! Oh yeah, they, those currently in office (along with the Deep State) would have to pass that into law. No chance of decreasing their salaries while they’re at it I guess? Serve your country for a term or two and then return home? Are you crazy, I haven’t gotten my $100 million in my bank account yet!!!

Comey had his predictable moment to paraphrase: “See, the IG exonerated me! Somebody owes me an apology!”

The corrupt are so corrupt, even when they know they are acting wrongfully, think they are doing nothing wrong (I didn’t do it and you all owe me an apology!) The lying piece of ……………..!

Will any of these rotten eggs, be broken……..cracked? Fry ’em!

Sometimes covering up amounts to months (years) of investigation, followed by a statement or report that states they found evidence of wrong doing, broken laws, followed by but we don’t have enough to prosecute. Or it would not be in the best interest of Americans to pursue any charges!

Would you get away with that?

The Clinton Cartel: It makes people in power do things they would not normally do. James Comey got sucked in to the witchery spells of Hillary Clinton. James once he gets nailed for his crimes, will he wish he had indicted Hillary?

https://www.globalresearch.ca/the-true-story-of-the-bilderberg-group-and-what-they-may-be-planning-now/13808,      Their priority is a one nation, no borders world.

While you’re at it, take a look at the membership list of the Bilderberg Group.  The members are listed by category.  https://en.wikipedia.org/wiki/List_of_Bilderberg_participants#United_States

A little clue here, Bill and Hillary Clinton are listed as members.   This group of powerful, wealthy politicians and friends of politicians with world influence is one reason I believe Bill and Hillary Clinton will never be prosecuted for any of their crimes of rape, murder and who knows what else.   They are protected by the Bilderberg Group, the Illuminati and the Council of Foreign Relations and of course the Democratic Party (Socialists).

The above organizations mentioned above are greatly responsible for the stench from The Swamp in Washington D.C.    How often are there corrupt connections to the Clinton’s with everything that happens from sex trafficking, pay for play events, a murder trail from Arkansas to the White House (no shame here, a man very close to Hillary was shot in the back of the head in the White House, and dumped in a D.C. park), to Benghazi, as other mystery deaths abound?   The Clinton Body Count is not fictitious!  Wherever there is a Clinton connection, there is always someone and usually many that are in place to protect/cover-up Bill and Hillary.   Comey for one, but the list is long.   Oh and interestingly, James Comey’s daughter is the prosecutor in the Jeffrey Epstein case.   See my point, Bill Clinton flew on Epstein’s plane at least 26 times, many of those flights to the sex island.   Bill and Epstein are tight, real tight and Comey’s daughter just happens to be in place.   For her to protect Bill, will she have to also protect Epstein.   This should be interesting to watch. How long can these people keep protecting the Clinton’s.   Wouldn’t this habitual pattern make for a great Alfred Hitchcock movie.   This is not coincidence.

Chuck Schumer is screaming for Secretary of Labor Acosta to resign and if he does not Trump should fire him.  Senator minority leader (a joke of a leader) Chuck has not said one word about Maurene Comey (daughter of JAMES COMEY) as the prosecutor in the new case against Epstein (child sex trafficking).   Chuck blows hard on Acosta but not so much as whisper on Comey.   You know the daughter of the Comey that let Hillary Clinton totally off the hook.   At least Acosta (along with others in the decision) got a deal that put Epstein in jail for a little time.   Now these new charges could bring up more significant time (possibly 45 years);   IF TRIED UNDER A LEGIT PROSECUTOR.   How much influence will DADDY COMEY have on DAUGHTER COMEY?

I don’t usually pay much attention to the Tea Party website (half their crap is exaggerated wishful BS), but, see the link below, I believe it to have some merit.

Nearly two hundred times “I don’t know or I don’t recall”.  Then this jerk lectures the American people to vote Democratic to stop the lies.  James Comey becomes more ridiculous by the moment. 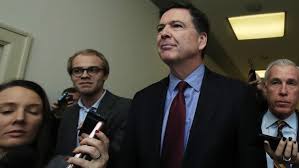 If you have been wondering for the last 15 months why it was that former bi-polar FBI Director James Comey, who had worked his butt off to help Hillary Clinton get elected in 2016, suddenly notified congress just 12 days before Election Day that the investigation into her illegal email server had been re-opened, The […]