Matt Lauer, and in fairness others, keep digging Donald Trump for his strategy for fighting/destroying ISIS.  Trump says he has a plan, a specific plan but won’t share it with the world and ISIS; let alone Matt Lauer.   Trump says we (okay maybe he says he) will destroy ISIS and can do it quickly…….but won’t say how.

Its okay for Trump to inform ISIS we are going to destroy them and end their terrorist regime……..they should know!   But, it makes sense, not to share how.   Some things should be obvious to them, they will have the hell bombed out of them.  You don’t share your military strategy with you enemy.  You don’t give them your military plans for destroying them.  They should know they’re going to die but, you don’t tell them how or when.   That gets people killed, Americans killed.  Why doesn’t Matt Lauer understand this?   Is it because he is the liberal media, incapable of understanding common sense?

Here is how I would explain it to Mr. Lauer:

Matt, you’re coaching a football team.  I’m coaching a team and if you are going to share your game plan, your strategy on each down, your trick plays; I really want to play against you.   Because now, I have a game plan, that counters and is an answer to your plan.  But guess what Matt, I’m not sharing my strategy.  You just gave us an advantage, which puts you and your players at a disadvantage……..and we’re going to kick your butt!   Sure Matt you’ll know the obvious, we’ll pass and we’ll run the ball…..but you’ll know nothing else.

Mr. Lauer, did you really want to know the plan or were just testing Trump to see if he stayed the course?   By the way, Hillary said there would be no ground troops on the ground in Syria, never, not ever.   That must have put ISIS at ease!  Have they sent Hillary a thank you e-mail message yet?

http://ift.tt/eA8V8J Wikileaks head Julian Assange says he has proof that Hillary Clinton lied under oath while giving a public testimony following the 2013 Benghazi terrorist attack. Assange says Wikileaks has 1,700 emails proving Clinton’s statements that she was not involved or… Vía Global Research http://ift.tt/2aUmgZ3

Too well written with resources, references to just simply dismiss.

Liberated Neighbourhood of Amein Bani Zeyd, Aleppo City By South Front The Syrian Army has seized a major militant warehouse in the recently liberated Aleppo neighborhood of Bani Zeyd. Most of captured weapons are from the US and Turkey and include such things as advanced US anti-tank missiles and launchers (BGM-71 TOW). . Video by […]

Thanks  to Hillary Clinton and Obama!

Hillary Clinton last evening on a very rare call in to Bill O’Reilly on the O’Reilly Factor said, “We need an intelligence surge to defeat ISIS.”.   Intelligence surge?   She is right about that part…..the intelligence part.  Obama has not had a smart strategy, or any for that matter.  Hillary has certainly had her hands in the region.   She has assisted in making it the dangerous region it is today, she sold or gave away weapons, to the wrong people.   She also said attacking the ISIS capital is  not the way to defeat them.   Keep doing what we are doing, taking back land/territory inch by inch through continuous bombing.  That’s it, that’s the Clinton strategy.   More of the same.

A surge in intelligence can not start by placing a dumb ass in the White House as Commander-in-Chief; like Hillary.   It starts by replacing military and CIA minds with some intelligence and listening to them.

The shockingly high figure comes from one of LTC(R) Shaffer’s sources involved with the refugee flows. CounterJihad, June 20, 2016: Last week we saw CIA head John Brennan testify that ISIS has “a large cadre” of foreign fighters to serve in attacking the West, and also that ISIS was probably using refugee flows as a means […]

via Former Intelligence Officer: 15% of Refugees are ISIS — The Counter Jihad Report

I actually had that thought early this morning.  Unsettling to be thinking of all the terror and to have a president that does NOTHING to stop it.

Even CIA Director John Brennan, a complete Obama acolyte, is admitting the infiltration risks from ISIS are increasing and concerning. Video prompted to 03:13 watch through 4:30:

CIA Director just blew a hole through the brainless head of Obama, and he didn’t use a gun!

Congress not doing its job……when was the last time it did?  Obama does what ever the hell Obama wants to do; making this country more vulnerable.  ISIS is not the greatest threat to our national security, Obama is.  Maybe they are the same. 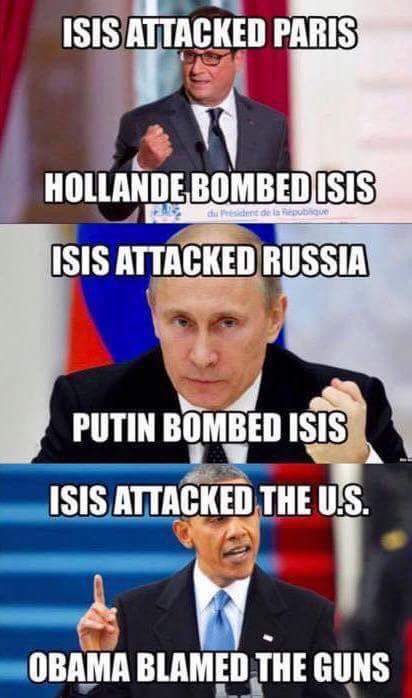