The Democrats have been screaming now for sometime about Russian influencing our elections.   Never mind though that 58,000 illegal immigrants voted in Texas alone.  By the way Socialist Dems that is voter fraud.  You bitch about Russia’s influence because you fear they don’t favor the Left Democratic candidates.   If they did you’d be silent.

Russia has been trying to influence our elections for generations.   THEY ARE COMMUNISTS, SOCIALIST………THAT IS THE RUSSIAN STRATEGIC WAY.   Their government also influences their own elections.  Surprised?  I know this may be a shock to some of you but the United States government has influenced elections as well.   No kidding ask Hillary!

An open border is a recruiting tool for new Democrat voters.  Forget the legality of it all!  Kamala Harris will want to include all those illegals for her “Medicare for All” pledge, it doesn’t matter they’ve contributed a dime.  You naturally born Americans and you who became citizens legally will contribute more which means you’ll have less as those who never contributed get more (the free stuff).

Pelosi hypocrisy at its finest!

Do Democrats/the liberal left hear themselves?  Contradiction and hypocrisy are everyday occurrences.

They, the Dems would argue that illegals should be allowed to vote (they will do anything to allow it, as long as they vote for a democrat); but then scream foul that Russia has interfered with our election process.

There seems to be some interference in the liberal’s mental processing! 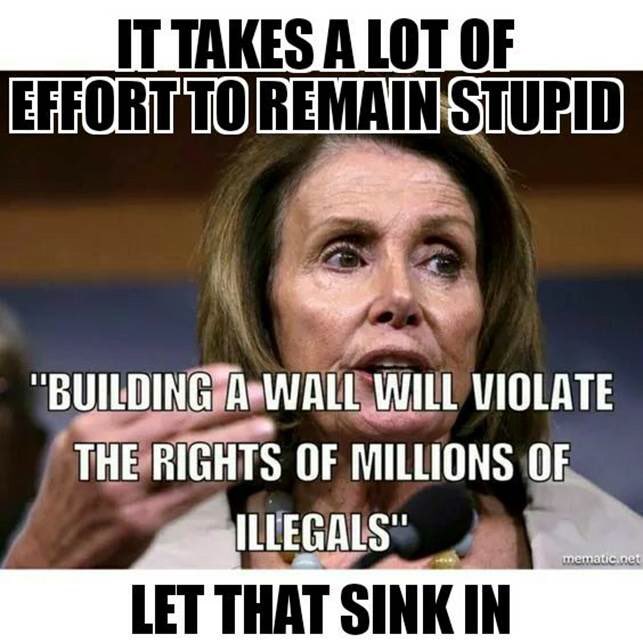 Haven’t verified this, you should know……but; it does show how an infiltration of radical terrorists can easily enter the U.S. within a mob of illegals.   No women, no children but they come here for opportunity!  Right!  The opportunity to destroy.