Interesting concept, or possible policy. Would it work? Why not! (not a question). 🙂

Source.Earlier this year I was talking to a friend about immigration and he told me that whether I liked it or not they are here now. The implication being that immigrants are here forever. I didn’t accept what he said then and since then I’ve been thinking of a policy that if implemented would turn… via […]

AOC, why don’t you adopt a few?

Dems approve illegal immigrants tuition aid.  Of course they do go where their potential future voters are.

“U.S. Border Patrol agents in the Rio Grande Valley Sector reported apprehending nearly 7,000 migrants in a single week who illegally crossed the border from Mexico into Texas…” https://www.breitbart.com/border/2019/02/28/7k-migrants-apprehended-in-one-week-in-texas-border-sector/ The faster the Great Wall Of America is built the better. Hey I got an idea. Can we trade some of our dumbass socialist liberals for […]

But this isn’t an emergency for the Democrats.   This is actually what they pray for. 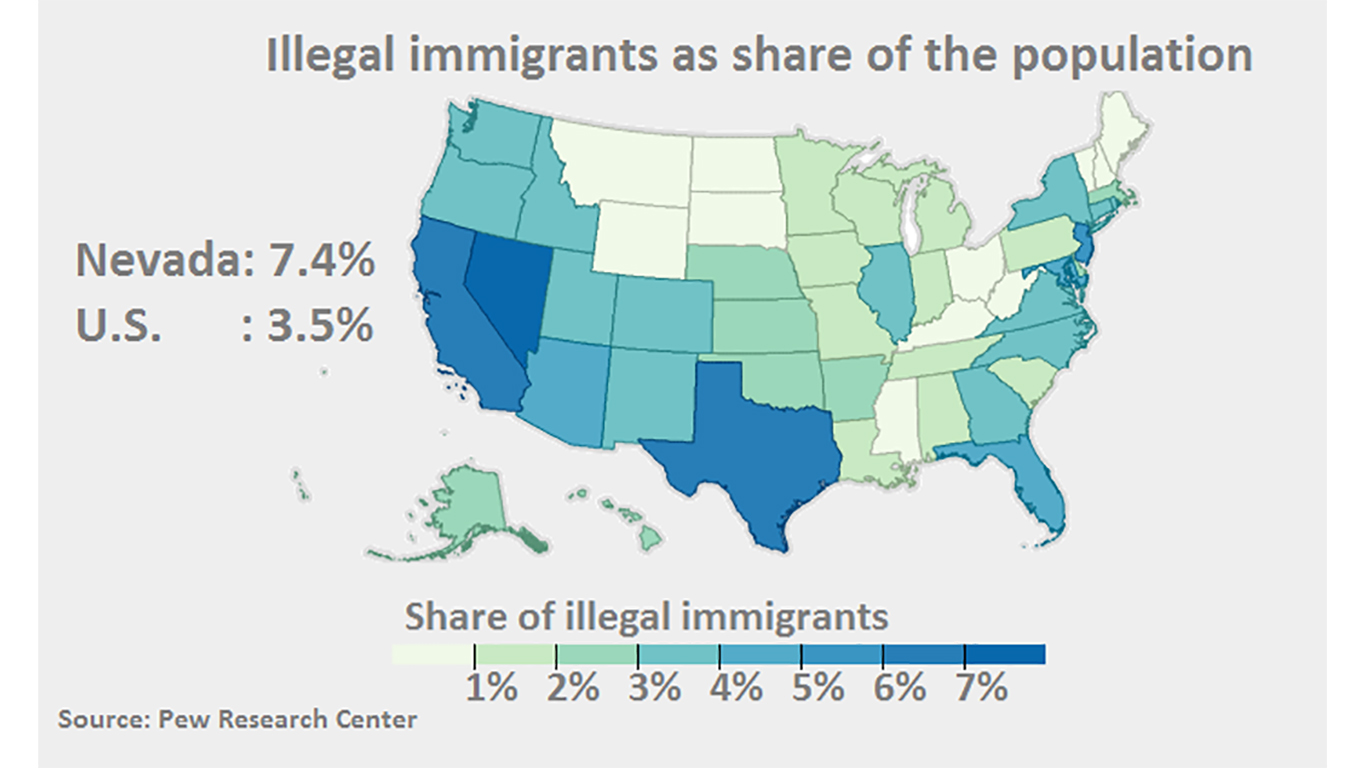 Below is a quote from one of my blog followers who lives in Nevada, what he, his friends and neighbors go through daily.  The statement was not edited by myself except to clean-up some very slight typo errors, which were few.  Despite the picture Democrats try to paint, that the Wall is not needed and the national emergency is manufactured; don’t take the word of political BS and instead get the truth from OUR CITIZENS (FELLOW AMERICANS), who experience it everyday.  Nevada is not directly on the border but near enough a high population of illegals exists.   Texas and Nevada with highest rates of illegals.  I encourage all of you to repost this message.
Quote
I LIVE HERE!!! My neighbors and friends who have their properties in Nevada ABSOLUTELY have no time for “discussions” or “arguments” over BUILDING our crucially important WALL FOR PROTECTING us, the US CITIZENS: WE LIVE HERE!!! Even if you live in Las Vegas, which is not immediately next to the Southern border you better protect yourself and your private property from roving illegals… I do not know anyone among my many friends who have not been violated/harmed by the illegals: horrific car accidents, robberies, home property violations, but the illegals have been “punished” by the State by “sending” them “back home”… . My two personal friends have been literally crashed in-car accidents and now they are invalids for life!!! By the way, they are professional highly trained structural engineers… Unlike most of our people here, I do not want to buy a gun for protection, and I moved into the GATED community paying much more than I can afford to be protected by 24 hr roving armed guards. Those demagogic very SICK Morons “argue” and “explain” that the Protective Wall we desperately need on our Southern Border is “economically” incentive !! They, mad “economists”, wish not to compare some numbers: for instance: the wall construction is about 16 billion, must be compared to more than $16 billion in U.S. taxpayer money wasted not-once but annually (!!!!) on truly hellish, useless and psychotically motivated animal testing. 16 billions of our tax money is wasted on these hellish experiments on animals in governmental labs!!!!!! DEAR USA CITIZENS, we must take these DEM CRIMINALS to public courts. They must take RESPONSIBILITY for their crimes and misleading “info”, and sent to jail for violations and manipulations regarding our very Constitutional rights! Some of these DEM-agogs deserve to be kept in mental institutions for life, before they destroy our country.  Unquote.  –   Simone
Thank you Simone.

Listening to these legislators who state they are against Trump’s declaration of a national emergency on the U.S./Mexican border is at a massively high level of hypocrisy and stupidity.   The Democrats and a few Republicans don’t believe the flow of illegals, drugs  human trafficking, and criminal gangs and disease are a threat to our nation.  These fruitcakes believe Trump is abusing the constitution declaring such an emergency to use funds to build the border wall.   They totally disregard that Obama declared a number of national emergencies, to get his way, and none of these people who are barking at Trump never so much as sneezed.

Lets not forget many of these elected jackassery officials once voted for funds supporting building a border wall in the past.   Now that Trump is president, they’ve had a change of heart. Possibilities are: 1) They either voted for it in the past “just for looks” when they were truly against it, because they knew it wouldn’t get built (they knew the then president would not pursue it); which is deceit (they lied).  2) They really do favor building the wall,  just not under Trump, they know “Trump would get it done” and they don’t want THIS president to be successful at anything (more deceit).  3)  They don’t want the wall, so illegals can enter our nation vote fraudulently (or they’ll pass legislation allowing illegals to vote; since they, the Democrats don’t understand the definition of “ILLEGAL”.

All scenarios are deceit/lying period.  That is your Democratic (Liberal/Socialist) Party today.  Yes today, its been bad for a long time, it’s just gotten so much worse.

They come making demands, to take what is ours.  This is an invasion, AN INVASION!  It is a weapon of war, an army!   We must do what ever, WHAT EVER it takes to stop them.

Immigration is a Legal means of entering a country.   Entry by a massive group, with disregard for borders, visas and law is an invasion.   If they come here with disregard to our laws, they WILL NOT ABIDE BY LAWS if they successfully enter.   They have no respect for us or our laws.   They will destroy this country.   George Soros’ Army.

There is a good chance the money being passed out in exchange to join the caravan from Honduras to U.S. is from the Devil’s best friend George Soros.   OR,  some of this cash could be coming from all those funds the Democrats bragged about having raised.  Democrats, the Left, Soros……. all the same!

The caravan, if allowed to pass through Mexico to our border should make it here just in time for our midterm election.   This was all by design, and the idea did not originate in Honduras, but right here in the good ol US of A.   We have a huge deficit to deal with, and this only adds to it, and the Democrats know this!  Illegals are costing us millions/billions.

We must stop the stupidity.  Trump must do anything within his presidential power to keep them out!  We need to create more jobs, improve healthcare, rebuild infrastructure etc., etc., etc.   We can not do this by taking on more to CARE FOR!   Does it look like these people are fighting for their rights in their own country(ies)?   NO!   They come here because they believe it will just be handed to them.   Criminals among them come here because we have more to take.   They will not contribute to making this country greater, they will tear us down.   That is what they did in their native lands.   They did not stand-up for themselves and fellow countrymen in their own homeland.   They will never stand-up with us here.   They’ll carry their country’s flag here, then walk on and burn ours.   Enough is enough.   President Trump should use our military to keep these illegals out.  It is not like they haven’t been warned.  It is time our military here at home defend our land.  This is homeland security!  This is not even immigration, this is an invasion.

Nobody is protesting what happens to children born and raised in the U.S. when mommy and daddy commit crimes, are imprisoned and separated from their child(ren).  But these illegal aliens, committing a crime the moment they illegally cross over the border, many bringing drugs and their criminal minds, are the protesters (the Left) main topic of the day.  Many bring children with them, some theirs, not always theirs.  The border patrol agents will tell you many come over pretending to be family, when they are not.   This is more about the left just having something to bitch about Trump.

Does it make sense that we give more attention (more support) to illegal immigrants than to our own people?   No, I am not saying parents that commit crimes should get a free pass.  The solution is much deeper than just tossing a parent(s) in jail.  The problem is age-old social problems:  drugs, poor education, unemployment, health care (inefficient), racism, religion (lack of), MORAL DECAY.   We have enough issues in this country, we don’t need everyone else’s.   One of Mexico’s presidential candidates theory/campaign slogan is for all of Mexico’s problematic people should, “take it to the U.S.”.   He is willing to even release criminals (drug dealers/gang members etc.) from prisons so they can go to America, the land of opportunity; to immigrate illegally.  Just go!  This moron, even wants illegals presently in the U.S. to be able to vote, “for him”.

So, Trump is right, without control of our borders we have no country!  It is getting more difficult to tell the difference between what we once were and 3rd world countries.