Is Hillary speaking to a ghost here?

In Bob Woodward’s book, The Choice, Woodward reported that while in the White House Hillary Clinton chatted with the long-dead First Lady Eleanor Roosevelt as well as long-dead Indian leader Mahatma Gandhi.  The conversations were facilitated by Co-director of the Foundation for Mind Research Jean Houston.   Wouldn’t it be interesting to know how those conversations went?  Who did most of the talking?

A couple of other interesting facts about the Ghost Busting Hillary Clinton:

Hillary enjoys getting her drink on.   In 2004 while touring Estonia, she out slammed Sen. John McCain (R-AZ).   Hillary conveniently missed a first round questioning session on Benghazi when she took off for a wine tour in Australia.

Hillary believes women who accuse men of sexual harassment are whiney.  She referred to the sexual harassment victims of former Senator Bob Packwood (R-OR) as whiney women.   According to the notes of good friend Professor Diane Blair, Hillary was “tired of all those whiney women and she needs him on healthcare.”.

This is my opinion but, Hillary Clinton is not going to voluntarily meet with Trey Gowdy and the Benghazi Committee.  To most of you that may be calling me Mr. Obvious and 1 + 1 = 2.

Rep. Gowdy is giving Hillary too much room.   He has given her until May 1st to meet for an interview.  Bring her in, Benghazi didn’t happen yesterday.  I know she has been interviewed once, another time, but she wasn’t serious then, we didn’t know or suspect as much.  That doesn’t mean she’ll take the Committee serious now, she has a huge I am above the law and everyone else attitude.  Speaking with forked tongue was easier then for the Arkansas Princess.  She’ll have a new set of questions.   The answers will get more difficult, she has more to hide than just emails.   Hillary has some “Hard Choices” to make, that doesn’t mean what she chooses to tell can be taken as the truth.   She has a history of being less than honest.  That is understated.  She doesn’t get the benefit of the doubt, she has had that long enough.

Gowdy should skip the invitation approach, go directly through the House now, don’t threaten her, just do it.

I have some blogger and author friends will tell me “Arlin be patient, let the Committee and Gowdy play their cards.”.    After years of contempt, unlawfulness and corruption that goes back to at least the days Hillary served on the Watergate committee, that she was fired from, how much more patience do we have to have.   Enough is enough.   Hillary Clinton and the Clinton clan should not be an issue, they should be in prison where you or I would be.    And yes friends, there is a trail of other former office holders that should be there too.   We aren’t talking about them today.

Hillary Clinton is certainly good at corporate and political crime.  She doesn’t escape guilt but she sure knows how to avoid punishment.

I am so sick and tired of this witch and her family getting away with virtually every activity they are involved.   The foundation under their name is nothing more than a front, for screwing somebody.   All the donations, excuse me I really meant bribes they accept from foreign countries, including those that have no human rights dignity, says it all about the Clinton’s “Sell out your country for whatever they can get.”   It isn’t about helping people, it isn’t about aid to countries facing disaster and hardship.  It’s about what the Clinton’s can gain for the Clinton’s.

What have these donor countries received in return from Hillary and her sex offending husband, SLICK WILLIE?    As Secretary of State who knows what all she gave away that didn’t belong to her, but to our nation.  Where did all the weapons and the missing dollars, big dollars go?  A more concerning question, what has she told (promised) China and others she would do for them when she is finally in the White House?   She thinks she’s in, she believes she is entitled.   So far the foreign leaders she snuggled up with must feel cheated.

Hillary and Bill have a trail of crime left behind them that should have them in a cell for life.  Lets see if the gutless House of Representative has any integrity at all…..I’m doubting they do.

“When we do not hold those corrupt accountable, we become their accomplice.”

There have been rumors for years, on Slick Willie’s other children, one who was mysteriously murdered.  Also, an old rumor that has resurfaced, that Webb Hubbell is Chelsea Clinton’s biological father.

I will have to agree with (now sit down) Hillary on this; “What difference does it make”.   I could care less about Bill Clinton’s sex life anymore.   It is old news, right Hillary?   Now if he were to make it back to the White House as our nation’s “First Gentleman” I would have a different opinion.   I don’t think it will happen, Hillary is no longer electable presidential or dog catcher material.

They do, the Clinton’s of course, give us plenty to talk and write about! 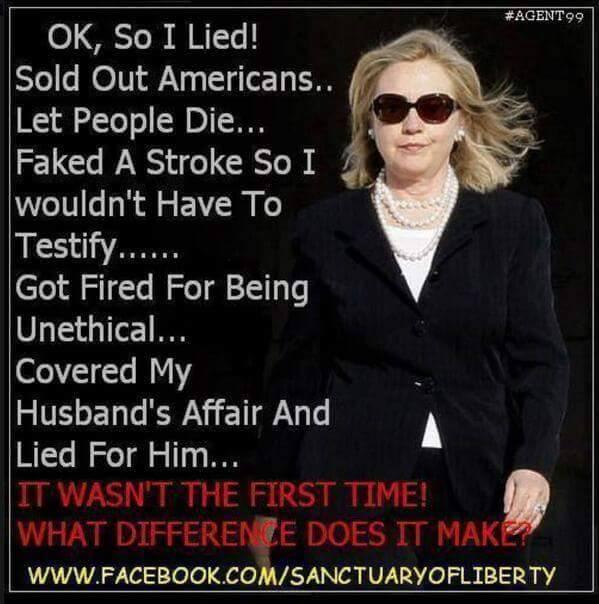 Why is Hillary Clinton even in the discussion?  The list above does not even scratch the surface.  You and I would still be locked up.

What will be interesting is how far the mainstream liberal media, who normally protects the Clintons, will dig and run with this e-mail situation.   It doesn’t qualify as a scandal until its good and hot.   They gave it, and it must have been a strain, a good two minutes on the morning news.

Scandals usually have repercussions.  Hillary has spent most of her adult life spreading unethical deeds only to be protected by other corrupt individuals and always skates by.  Now she has hidden, or so she thought, her communication trail.  Only purpose in doing so, to hide her deceit and agenda.  Excuse me if I am skeptical that she will be held accountable yet.

TREY, she has handed you her man purse with a stick of dynamite, will you light the fuse?

The Clinton’s have that “we are exempt from all the rules that others must follow attitude”.    They’ve practiced it for a long time, and it has become a trait of those that have breathed the air of the White House and D.C.

The liberal democrats will be screaming this only came about because the Republicans won’t let go of Benghazi.   They shouldn’t!   Hillary and Dems “What difference does it make how or when the personal email only thing came to surface”.   Law breakers leave trails!   Duration does not trump ethics violators!

It is time to put an end to the craziness and hold the law breakers in our government accountable.   This would be a good place to start!