Gary Pinkel has more wins (117) in his 15 years as Missouri’s coach than the 115 wins combined by multiple coaches in the previous 25 years.    Coach Pinkel is the winningest coach in Mizzou history.  We will miss him, and the next head coach has a very tough act to follow, not just on the field but how he conducts himself off the field.

Coach Pinkel has another opponent, one we didn’t know about until yesterday when Coach announced his resignation.   The Coach has non-Hodgkin Lymphoma.  He says “I still feel good physically, but I decided that I want to focus on enjoying my remaining years with my family and friends.   And also have proper time to battle the disease and give full attention to that …….I don’t know how many years I have left, but I want to turn my focus to life outside of the daily grind of football.”   I am sure Coach will be successful at doing all that…..it won’t be easy for him for a while, football has been huge to him for most of his life; but if you know anything about Pinkel, he never lets it get bigger than the human element.   We witnessed that this past week, when he stood in support of his players boycott.   He cared more for them personally than just winning a football game.  How many SEC coaches would have done the same……..how many coaches throughout the country?

Coach Pinkel is the most popular and recognized individual on the Mizzou campus.  That isn’t any different from most major college football schools, the head coach rules.  He is also the most respected, by faculty, coaches and students, no matter what color.

The Tigers have 3 remaining games this season, one against BYU tonight……we’ll see how much fight they have after a rocky week.   They should be inspired to lead their coach into retirement with some wins, possibly another bowl trip.  Regardless he leaves a winner, and has set the mold for the future with Mizzou.

Gary Pinkel, the Missouri football coach made a statement on Twitter that the Mizzou family stands as one united with their student athletes.    Is that a statement that Pinkel is asking for the resignation or firing of the Mizzou system President Timothy Wolfe?   Is the winningest football coach in MIzzou history compromising his own position?

If Mizzou forfeits their game this weekend with BYU, Missouri will owe BYU a One million dollar payment according to their contract.  Players threatening not to play are under scholarship.   A football scholarship is a contract between the player and university, the player practices and plays games and represents the university, in exchange the student athlete gets an education……..he/she goes to class.   I understand some classes may be skipped as well now.   I also believe this racial issue exists on the campus and campuses throughout the nation.   I believe there is a better way to deal with the issue.   Protest, demonstrate, do it on game day in front of an entire nation.   You won’t get that audience by a forfeiture.

The board of curators meet today, in closed session to discuss personnel matters.   If Wolfe is fired……..the student protesters win their grievance/complaint.   Does this set up a repetitious way of handling similar problems in the future…….they’ll hold the U of Missouri hostage every time they have a complaint.   Who will be next? 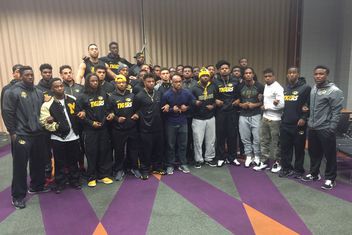 ESPN.go.com reporting on the black Mizzou football players boycott of games and/or practice activities until president of the university system Timothy Wolfe resigns or is fired.   Protests have been on the increase by students on campus due to some racial issues/events that have gone without any disciplinary action by Wolfe.    These racially tense events have not been among the players of the football team, but the black players are boycotting in support of those effected and the student protesters.

ESPN in their article concerning the boycott by the players had to mention that Columbia, Missouri (Mizzou Campus) was 2 hours west of Ferguson.  Has Ferguson become the central headquarters of protesters in Missouri or possibly nationally now?    Racial issues were present before, certainly during and after the protests and riots of Ferguson.   The ESPN article also reminded readers that Ferguson was where Michael Brown was killed by a white police officer spurring the protests.

What was ESPN’s purpose in mentioning Ferguson?  Are they implying that Ferguson is participating in the protests, which have not been violent (yet)?

What is going on at Mizzou is racial, but only against Wolfe and administration whom the students believe refuses to take action against a few individuals that have taken part in racial slurs against some black students and what I will only describe as an ignorant act of racial hate (smeared human feces on a door of a black student).  What went on at Ferguson was racial, but for ESPN to connect the two as if they are related is wrong.   Is everything past and present to be compared with Ferguson?

I know the football players are joining the protest by boycotting because of the attention it raises both locally and nationally.   I wish they, the players joined students on campus by participating in protests  peacefully and possibly they have.  They could possibly show up for the next game against BYU in Kansas City  and participate in some sort of demonstration prior to the game and after.   That would draw attention.  I realize not showing up and leaving only approximately 22 white players to play or possibly a forfeit would draw attention as on a large-scale as well.   I guess that is their point, but who is it really going to hurt.   What does it do to the football program, one that many blacks count on?   I question what the outcome of such a boycott would present.   I believe it will hurt the black athletes, more than anything (most of the roster is black).   It hurts the university financially as well.   Most of the these athletes are on scholarship.

I do not want to sound like I am down playing the problem, there is a problem.   Some people just love to hate and create issues for all.   I agree with the students protest and demand to remove Wolfe.   Those who create the racial tension must be dealt with.   Many of the white students, to include white players have shown their support in the protests.   This should send a strong signal to the administration.   They are asking for the problem to be dealt with by firing Wolfe.   The administration will have to deal with this situation.   They could send a message to every campus in the nation by their action.   It would be another thing if the students were holding the administration hostage……..some may believe they are.   I don’t think so, they were only asking in the beginning that Wolfe deal with it, he obviously failed.   If Gary Pinkel fails as Mizzou coach he would get fired.   Whats the big deal, fire Wolfe.

There are racial issues on college campuses nationwide.   I doubt you’ll see any other black players from other football programs joining the boycott.

I wish the football team would show this kind of commitment and fight on the field.