NANCY PELOSI has clearly demonstrated that it is SHE THAT IS NOT FIT FOR OFFICE! Our founding fathers if alive today would NEVER have allowed a numb-skull like Pelosi in the position she holds. NEVER!

Originally posted on Kingsjester’s Blog: ?“Whenever the president finds that the entry of any aliens or any class of aliens into the U.S. would be detrimental to the interests of the United States, he may by proclamation and for such period as he shall deem necessary, suspend the entry of all aliens or any…

A thought I have, something to ponder.    What would our Founding Fathers say, how would they react regarding the state of the United States;  the true state, not the one Barack Obama falsely spoke of in his FINAL State of the Union a few nights ago?

The Founding Fathers would not be happy, if they were with us today.

We’d have quality candidates, they would make todays choices look mighty foolish.  They’d be correcting todays politicians left and right, letting them know they have no clue or  comprehension of how this government was intended to operate.  The people and what is in the best interest for this nation would be held at the highest tier, not ones self; particularly our national security.

The 2016 Presidential Candidates from both sides claim to be the only qualified choice and are quite vocal who is not qualified.   Comparably speaking, none of the 2016 candidates qualify against our Founding Fathers.

Look where we have gone!  James Madison to Nancy Pelosi!   God save us!

Our Founding Father’s forethought shames the thoughtlessness of present day moronic elected and re-elected officials today.   You have to wonder when the dumbing down process really started with the likes of Pelosi, Harry Reid, Obama, Clinton (both), Bush (both), Carter…….it goes on and on, I’m just getting started. 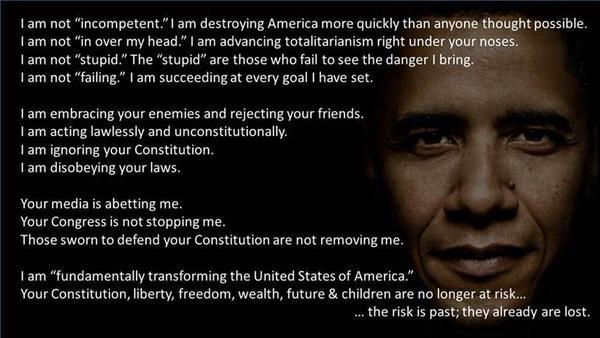 The part of this poster I disagree with would be “……..the risk is past; they already are lost.”     The risk is not past, it is present……….and as long as we have a breath, this maniac and  worthless Congress can be stopped.   Our destructive direction can be reversed.   Do you think our Founding Fathers would give up?   No, but they would not have let it get to where we presently are!

We must do something if only for our children and grandchildren.

Thomas Jefferson most interested and inspired by the Iroquois structure of government.  You won’t read this in the history books.

THE FORGOTTEN SOURCE FOR SEPARATION OF POWERS

The United States Constitution was an inspired document. The authors were brilliant, and the Founding Fathers who wrote it geniuses.

But they didn’t pull their inspiration out of thin air …

For example, one of the core principles which the Founding Fathers built into the American system of government and our Constitutions is separation of powers.

This idea – also called “checks and balances” – ensures that no single person or group can seize all of the powers for themselves. Decisions are therefore more likely to benefit the nation as a whole … and not just those making decisions.

By spreading power around, absolute corruption is less likely to occur.

But few people know where the Founding Fathers’ got their inspiration for the principle of separation of powers.

In the mid-16th century, five northeastern Indian tribes – Mohawk, Seneca, Onondaga, Oneida and Cayugaa – formed the Iroquois Confederacy, joined later by the Tuscarora tribe. They adopted a constitution, reflecting concepts of checks and balances and separation of powers that impressed such later Americans as Washington, Franklin and other Founding Fathers. Indeed, historians maintain that many principles of the Iroquois constitution were woven into the United States Constitution.

Whereas, the original framers of the constitution, including most notably, George Washington and Benjamin Franklin, are known to have greatly admired the concepts, principles and government practices of the Six Nations of the Iroquois Confederacy; and

Whereas, the Confederation of the original thirteen colonies into one Republic was explicitly modeled upon the Iroquois Confederacy as were many of the democratic principles which were incorporated into the Constitution itself ….

The Congress, on the occasion of the 200th anniversary of the signing of the United States Constitution, acknowledges the historical debt which this Republic of the United States of America owes to the Iroquois Confederacy and other Indian Nations for their demonstration of enlightened, democratic principles of government ….

Thomas Jefferson also had close dealings with the Iroquois:

Prominent figures, such as Thomas Jefferson in colonial Virginia … were involved with leaders of the New York-based Iroquois Confederacy.

One of the delegates to the Constitutional Convention – John Rutledge of South Carolina – read lengthy tracts from the Iroquois Constitution to the other framers, beginning with the words “We, the people, to form a union, to establish peace, equity, and order ….”

AMERICA MUST RE-ESTABLISH SEPARATION OF POWERS

America has lost the separation of powers in our government.

The federal government is trampling the separation of powers by stepping on the toes of the states and the people. For example, former head S&L prosecutor Bill Black – now a professor of law and economics – notes:

The Federal Reserve Bank of New York and the resident examiners and regional staff of the Office of the Comptroller of the Currency [both] competed to weaken federal regulation and aggressively used the preemption doctrine to try to prevent state investigations of and actions against fraudulent mortgage lenders.

And the courts have been stripped of their ability to review the illegal actions of the other branches of government.

America must re-establish the principle of separation of powers … or we will slide into tyranny.

In our every deliberation, we must consider the impact of our decisions on the next seven generations.

Americans would be wise to adopt this type of long-range thinking.

But America’s Founding Fathers were most directly inspired by visiting the Iroquois, reading their Constitution, and watching their government in action. After all, seeing a principle actually working in practice in the real world is much more inspirational than reading theories or debating ancient history.

The wisdom of our founding fathers  holds true today more than ever.  What they projected would cause us to fall from greatness, has and continues to happen.   Here are a few quotes from our founders to ponder:

” Banks have done more injury to the religion, morality, tranquility,  prosperity, and even wealth of the nation than they can have done or ever will do good.”  John Adams

“I place economy among the first and most important virtues, and public debt as the greatest of dangers to be feared.  To preserve our independence, we must not let our rulers load us with perpetual debt.  If we run into such debts, we must be taxed in our meat and drink, in our necessities and in our comforts, in our labor and in our amusements.”  Thomas Jefferson (Worth repeating I might add)

“Beware the greedy hand of government thrusting itself into every corner and crevice of industry.”  Thomas Paine

“All the perplexities, confusion and distress in America arise not from defects in the Constitution or Confederation, not from a want of honor or virtue so much as from downright ignorance of the nature of coin, credit and circulation.”  John Adams

“If ever again our nation stumbles upon unfunded paper, it shall be like death to our body politic.  This country will crash.”   George Washington

Here is my favorite:   “I wish it were possible to obtain a single amendment to our Constitution.  I would be willing to depend on that alone for the reduction of the administration of our government to the genuine principles of its Constitution; I mean an additional article, taking from the federal government the power of borrowing.”  Thomas Jefferson

I believe this is still the greatest country on the planet.   I don’t have to tell you what our fore fathers faced to gain our independence.   The turmoil and struggles they faced are not that different from what we face today.   They fought and won, and then built the nation it became, virtually from scratch.   We face a similar battle that only living in a modern time makes different.

We can rebuild this nation to an even greater greatness.  We can regain a more respected place in the world, one that we are looked up to than looked down on.

We need to  start by using our minds, our voices and common sense.   I believe there isn’t a problem that doesn’t have a solution.  This is 2014, we have the knowledge to find the answers……… are we willing?

Oh, by the way, we still have a right to assembly, together we make a very powerful voice.