For Sanders, nothing is wrong with Cuba. One socialist defending a true socialistic nation.

Communism is a version of socialism. Bernie is a communist disguising himself as a Democrat. He will admit to being a socialist……..only because he can no longer hide it. That’s what they do, hide it…

The Democratic Socialist Party accept Bernie’s way. He makes them nervous though……..because they aren’t fooling us all. (Arlin Report comment)

Can’t really blame the Clinton’s on this one! But seriously, if you think this was a solo killing………read this! Even Bobbie knew better.

“The plan was hatched with the help of US Sen. Patrick Leahy (D-Vt.), his office confirmed, to help ensure the release of ailing US aid worker Alan Gross.”

Congress not doing its job……when was the last time it did?  Obama does what ever the hell Obama wants to do; making this country more vulnerable.  ISIS is not the greatest threat to our national security, Obama is.  Maybe they are the same. 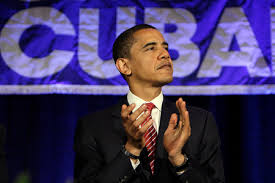 Reopening the door for relations with Cuba, a relationship that is referred to as a “normalization”.   How is that possible?  How do you have a normal relationship with a nation you have not had a relationship with in 56 years?  How does that happen with a president that is anything but normal?  That could probably be said for Raul Castro as well, surely Fidel.

For Obama, timing is everything…….fast track.

I am sure the great people of Chicago won’t mind loaning this watertaxi to Miami.   Cuba is just a 90 mile ride away.

Hey its closer than Hawaii.   Think of the money we’d save and it would make the perfect early retirement home for Obama………and America!

How long has this decision to open the door to Cuba been in the works?

Obama delays many decisions, such as Iraq and Syria over ISIS.  Cuba seems to be a quick draw, not giving the population of the U.S. time to provide a little feed back, some kind of consensus.   I may have missed it somewhere among the rest of Obama’s BS, but, I didn’t even know he had an opinion on Cuba.  I am surprised he knows the geographic location of the island nation.

I understand that a president has a lot on his plate, but it seems like Obama has a check list with predetermined issues and policies he is acting on, with very little consultation.  This is lame duck crap, as was his immigration policy.  Could there now be a flood of Cubans entering the U.S. freely?

Obama does not concern himself with crisis’, he is to busy creating new  ones.    One will come from this.    He goes from one issue to another, like he is picking apples, nothing being solved, nothing improved……   Obama is a foreign relations embarrassment for the U.S.

Barack Obama is a wrecking ball destroying our nation.