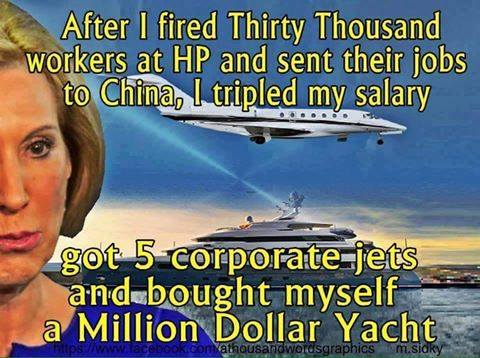 You might call this Political Prostitution.   One buys the support while the other will sells it!  But….she is a business woman!

Last night, Donald Trump was right about one thing, the participants in the Republican debates needs to shrink in number.    If anything it would give each candidate more time to fully answer questions, clarify positions, share a position, defend themselves.    Over the course of time the number of Republican candidates will decrease, through self elimination, campaign budget problems, etc.

I believe the American public is a bit tired of seeing personal attacks between the candidates.  It’s entertaining for awhile, but then, can we get to the issues?   Most of the attacks are against Trump, we can see that.   The Donald doesn’t help the matter with plenty of instigating of his own.   If Trump wanted to be taken more seriously by what is now some of his political peers………then he needs to grow up a little.   Rand Paul said it, Trump is Junior High.

Carly was good, but not as great as CNN tried to make her in their post-debate round table.   The only female candidate in the race for POTUS could show a little more personality.   A smile once in a while, will go a long way.    She was one of a few, a very few, that stated a glimmer of a plan, for solutions to an extremely troubled nation.  She will probably trade positions in the polls as early as today with Carson.

Carly stay focused, don’t spar with Trump…….stick to the issues; you’ll turn yourself into a serious threat to the liberals and Clinton.   Stay the course!

I think you can call it a sense of humor; I mean Trump does say things we all laugh about, right?  🙂

The Donald was on The Tonight Show with Jimmy Fallon last night.  It was a good program, they did a mirror comedy routine, Jimmy made up as Trump, Trump on the other side, his own reflection.   It was good, entertaining, that was all it was supposed to be,  Trump poking fun at himself.   Fallon piled on.

Then afterwards, the interview:  Trump said Carly Fiorina was a very nice lady, but that she had some corporate failure.    Okay, like Trump hasn’t.    Most wealthy millionaires and billionaires, hell even thousandaires have had some failures.  You learn from failure.    Your successes must outnumber your failures.  Trump just won’t admit his.

Fallon ask Trump if he has ever apologized?   Trump never really answered, except he finally said “I will if I am ever wrong.”  He was half-joking, playing to the audience.   Trump does have a sense of humor………it stays in character though, an arrogant one.   He doesn’t want to disappoint the public.   Behind the scenes, out of the public eye, I understand he is as nice a guy as you will ever meet; but I have no way of really knowing that.

Ted Cruz is 100% correct, the Republican House and Senate in Washington has done absolutely “NOTHING”.    The current field of candidates for president, calling themselves Republicans, don’t look much different.  What are they telling you, what are they discussing?   Nothing, except talk about Donald Trump.  Donald Trump is dominating discussion, not about issues but about Donald Trump.   THAT is playing into Donald Trump’s hands.   The Republican Party is making Donald Trump, not just a candidate, but, an ISSUE.  Now he becomes a question in every interview.   When a candidate is being interviewed and ask questions on issues………they comeback to the ISSUE of TRUMP.

Erick Erickson’s uninviting Trump from Erickson’s Redstate Gathering, did what?   Gave Trump more headlines, he became the focus, at least of the opening of Erickson’s party.   Later we find out that was a bit hypocritical of Erickson; seems he has done some politically “incorrect” name calling of his own.

Chuck Todd of Meet the Press, interviewed Trump this morning.   Let me rephrase that:  Todd was trying to force an apology from The Donald for the comments directed toward Megyn Kelly (you know, the “Blood coming from her eyes………etc. thing).   More headlines for Donald!  Now the news is Donald Trump won’t apologize.   They spent most of the program discussing how and what it would take to make Donald Trump go away from the presidential race.  All they did was confirm, the mainstream media pushing the outcome of American politics in a direction favorable to their agenda.

Alert!   While I have been writing this post, a news development just occurred; Chuck Todd actually interviewed (pre-recorded) Marco Rubio about a couple of actual issues without mentioning Donald Trump.   Is there hope?    Nope!   He went to Claire McCaskill and he could not avoid it.    You know, Claire the Hillary supporter.  Now there is an ethical source of political opinion for you.

You want Donald Trump to fade back into his penthouse, or to his golf courses?   Then, they must start talking about the issues confronting this nation.   And yes, some of those topics are issues being slapped around by Trump.   Stop making trump the issue.  I want to know what the presidential candidate is going to do in the future.   How is he or she going to get the Republican Party to uphold the promises made.   When does the status quo change?

Trump has received much of his attention/support as “The Protest Candidate”.    We have set and watched Congress set on their hands, doing nothing, giving Obama free reign.   The other candidates to be successful must discuss the issues.   Not just talk about the problem, but solutions, their solutions.

Only the candidates can get rid of Trump. Ted Cruz has an opportunity to take the Republican football and run.  Carly Fiorina belongs in the next Republican debate with the boys.   Carly, some advice, be the real different kind of Republican.   Tell us what you would do and how you would do it.   That would be refreshing.  It’ll go along way.   Don’t worry about political correctness or tone, but set Trump aside.    🙂