Do you recall the President referring to the Benghazi incident as “a bump in the road?”
Today I heard an ex-Navy Seal being interviewed on Fox News regarding a book he has written about how to handle crisis situations in our lives.
At the end of the interview he asked if he could make a comment on Benghazi and, of course, the anchor said “yes.” He then thanked Fox News for keeping the Benghazi story in the news, since other news organizations are not.
He said the Seals who died deserve the public knowing the truth about the whole affair.

The poem was written by an anonymous Marine Corps officer:

“THE BATTLING BOYS OF BENGHAZI”

We’re the battling boys of Benghazi, No fame, no glory, no paparazzi.
Just a fiery death in a blazing hell, defending our country we loved so well.
It wasn’t our job, but we answered the call, Fought to the Consulate and scaled the wall.
We pulled twenty countrymen from the jaws of fate, led them to safety and stood at the gate.
Just the two of us and foes by the score, but we stood fast to bar the door.
Three calls for reinforcement, but all were denied, so we fought and we fought and we fought ’til we died.
We gave our all for our Uncle Sam, but Barack and Hillary didn’t give a damn.
Just two dead Seals who carried the load, No thanks to us…we were just “Bumps in the Road”.

So, will this reach every American with a computer?

Or do we act like the press and give a pass to the people who literally sat there in the White House and watched the Seals’ execution on live streaming video and did absolutely nothing?

“What difference does it make?”

And she’s thinking about trying again to be President! 😡😡🖕🏼

So when has Obama stood with Christians? 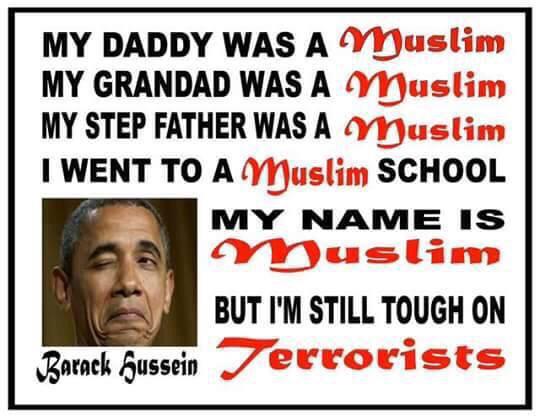 Every once in a while something catches my eye……..I guess it did with Obama here too!

“Those voters who chose not to JUDGE the morals and character of their candidate of choice brought us Obama.”

ISIS already works within the United States, their greatest ally resides at the White House, you know his name……Barack Hussein Obama.

We the United States of America, are without a president.   The Muslim Brotherhood and ISIS have  an ambassador to the U. S.  in Obama, and like any ambassador, his allegiance is to those he represents.  Obama’s interests is in Islam not the U.S.

Who is more destructive to our nation, Obama and his non-policy agenda, which is his hidden agenda or the ISIS?   Flip a coin!