But I guess they never taught you that in the grade school you went to. 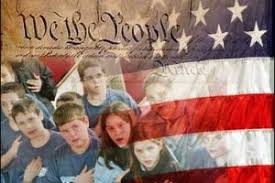 If we do not teach our children to respect our flag, anthem and to raise their voices in a civil manner, respecting the rights of others and OUR constitution, who will defend them/us?

I pledge of allegiance to the flag of the United States of America and to the republic for which it stands, one nation,  under God, indivisible, with Liberty and Justice for all.

The photo above was posted by Amanda Ann on Facebook.

Students at Valdosta State University rallied in support of the American flag; this following last weeks protest by a small group of black students desecrating the flag by walking on it.

This group of mixed racial students far out-number last weeks incident when an Air Force Veteran, Michelle Manhart was detained by police for retrieving the flag and refused to give it back to the protesters.

Will this demonstration of flag support and patriotism receive as much media attention as the flag desecration event?

Michelle Manhart, an Air Force Veteran was arrested saving the flag from desecration at a university protest.  After she retrieved the flag, the protesters begged for it back.   Manhart was not going to give the flag up, not even to the cops for them to continue walking on it.

I know all the political correctness, that the protesters have a right to express themselves under freedom of speech and that includes disrespecting our flag.  Michelle Manhart was expressing herself, and her statement came out stronger and she was not afraid to stand alone.

I’ll take Michelle Manhart on my side anytime.

The American flags planted on the Moon have all turned white from years of the Sun’s radiation.   The American flags flying here on planet Earth still hold their color, the stars and stripes are visible.    Is our flag turning white, in surrender?   I am not referencing the flag that was painted white over the stars and stripes on the Brooklyn Bridge just recently.   I had not learned of that until after I had already started this writing.

Flags will fade, lose their color from the sun and weather.   That is perfectly acceptable, we replace them when they become worn.  I’m not talking about weather-beaten flags, I am speaking of flags flown from a beaten nation.  Oh the color is still there, but underneath, figuratively speaking are we flying the white flag of surrender?

The majority of Americans are frustrated with our government and politicians.   Elected government officials don’t represent the people who put them in office.  This Congress is the most inefficient body of government ever elected in the history of the United States.  Their main interests is in self and special interests with benefits.  Americans only see a do nothing, incompetent group of spoiled, silver spoon, wealthy club members.

Big government keeps getting bigger, a place where Thomas Jefferson warned us never to go.   We are not governed (ruled) by those elected, those appointed run the government agencies that keeps growing in number.  We are in fact regulated!

Government agencies continue taking on additional responsibilities to manage through executive order from none other than the illustrious wizard, Barack Obama.  Legislators don’t legislate, these agencies lead by a director who regulates; quite often at their own discretion or whatever THEY believe is best for us.   Example, Obamacare, several hundred times it is stated in the”book of regulation” that the Secretary of Health shall, will or may decide upon his or her discretion.   So it is, the agencies setting the rules by which we live by; most often by un-elected individuals. Ask yourself, honestly, are you a citizen or a subject?

Americans see a never-ending process, an accurate evaluation as there is no one stopping the craziness.   The internet will now be regulated by……..the government, the FCC just got bigger and we just got quieter.   Obama now wants our nation’s water ways to be REGULATED by the EPA.   There’s a competent agency for you……prepared to pay fees to paddle your canoe?  That may or may not be a stretch, but you get my point.

Obama’s method to inflict his power and grab more of it through executive order marches on with little opposition.   Some of us speak out, a handful in Congress may speak up, but only for show, they don’t take action.  Please, put up or shut up!  Your rights are being taken away, inch by inch, by the day, by the moment.

We have gotten accustomed to incompetence in government, it has gone on for so long.  Elections of non-representation is the norm and has become almost acceptable.  We still bitch….which agency will take that away, the FCC?  We don’t elect patriots who work in our best interest and do what they are sent to do; we elect candidates with agendas of a political party.

It is all a part of the dumbing down of America.   We feel hopeless, nothing to do, “There is nothing I can do about it.” so we just accept.   Are we throwing in the towel, giving up?

For all that our Flag stood for, stands for yet today, I don’t want to see it swapped out for a white flag, not at all, not even figuratively speaking.   If we are waiting for Congress to stop the bleeding they won’t, they are part of the problem.   The Supreme Court, don’t hold your breath, they are appointed!  It ultimately becomes the responsibility of those whose hands its always been in; We the People.

We have become so disconnected and divided……we don’t look for solutions to the problems we are facing as a nation together.   They, the government, the POTUS want it that way.   Can’t you hear them “Good God…….take on a nation that is united…….why I might have to get a real job.”

We need to keep flying the Stars and Stripes, we need all of us speaking out, getting involved, raise some hell.  Most of all we need to come together. TOGETHER, THEY FEAR US.   US, the United States.   Together we can beat the Regulators.