WHY WOULD THE NFL LISTEN TO CONGRESS? THEY DON’T LISTEN TO US. APPARENTLY UNLAWFULNESS IS THE NEW LAW IN THIS COUNTRY NOW ANYWAY. LOOK AT OBAMA!! CONGRESS LETS HIM SKATE BY, THEY DON’T HOLD HIM ACCOUNTABLE ……….WHATS CONGRESS GOING TO DO? SCREW’EM.

WASHINGTON (AP) – Senators from both parties warned the National Football League on Thursday to get rid of a four-decade-old TV “blackout” rule or risk congressional action to restrict the league’s lucrative antitrust exemption, which allows NFL teams to negotiate radio and television broadcast rights together.
( Senators to NFL: Drop ‘blackout’ rule or we might )

The blackout rule, which bars home games from being televised in a local market if they have not sold out, is unfair to fans who have helped the league reap billions of dollars in revenue from broadcast rights to games that are among the most-watched programs on TV, lawmakers said.
( Billy’s thoughts – I don’t like the blackout rule but I don’t want the US Senate telling the NFL what to do. )

It isn’t just Obama disrespecting our Constitution, Congress is as guilty by aiding and abetting King O.  The Congress has as much responsibility to govern under and defend our constitution as our president.   When they do not hold the president or other violators accountable, they are equally guilty and in violation.

The Republicans, with control of both houses will change nothing….they got what they wanted, elected.

We the People are also responsible for defending and protecting our constitution.   We protest in mass numbers over killings of black citizens in our communities.   There are many serious issues facing our country that the president and the congress do not share the same views as We the People.   Why aren’t we protesting in D.C. and across the nation on immigration, loss of jobs due to government regulations and policy, governments greater interest in foreign affairs rather than the affairs here at home, poor policy fighting the threats from ISIS, the increased U.S. debt, shrinking our military?   There are many more issues that our government does not concern themselves with our opinion or position. We elected them to represent us not put it to us.   We are insignificant to our government.   They are not interested in what we think except when they want our vote to be elected, then we matter.

We have proven we are willing to take up the streets in protest……that same energy needs to be spread on other important issues, ones that are critical to our future.  Our government office holders think they own the power…….there is truth to “there is power in numbers”.   We must protest in numbers greater than anything this country has ever seen before, if we are to take our country back.  Marching, protesting is a revolution.

$200,000 speaking fee for Hillary Clinton. There isn’t anything I have ever heard Hillary say that was worth so much as a penny. 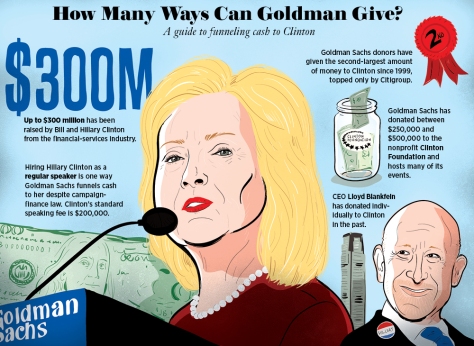 Infographic from The Nation.

A good rule of thumb is never to vote for a candidate who takes money from Goldman Sachs.

For reasons why, click on The Great American Bubble Machine, The People vs. Goldman Sachs and The Vampire Squid Strikes Again by Matt Taibbi for Rolling Stone.

Did you hear about this?   Good chance you didn’t; we’ve been preoccupied with Michael Brown and now Mr. Garner.   But you need to know what else our government is up to.   Are we engaging in more war activity or is this just for show?   Somehow, I don’t think its enough to really scare Putin?    Check this article on the link below.

Our government loves keeping us distracted……so they can sneak by us.

Great information here, a must read.

Is the Department of Justice going to investigate every killing of a black man or just the white cops on black men?  They couldn’t  possibly investigate the black on black killings, they happen everyday.   Has there ever been a protest for B on B killing?  We aren’t protesting the right problems. 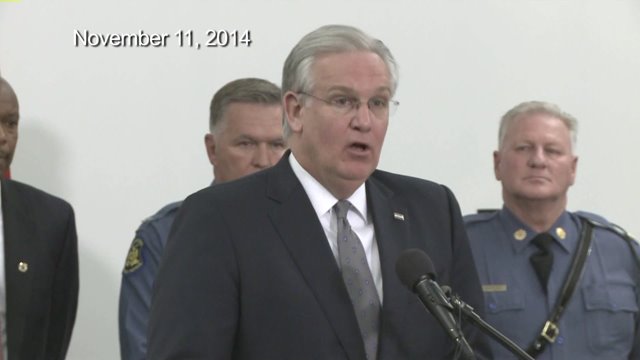 Use your head!! Nixon activated the National Guard and declared a “state of emergency”; stating under no circumstances would rioting, looting and arson be tolerated. Then he holds them back on the night of the announced decision. This did not come from Gov. Nixon. He would not say and do one thing one moment then do another the next. Not like this, with this much on the line! The only way Nixon puts on the brakes and hides his troops is if a higher official or authority ordered him to do so. OBAMA!!! Obama wanted to see more unrest and watch Ferguson burn. Why would Obama do that??? He was born in Kenya, he is Muslim, and Muslims want to destroy America and kill all Christians, BLACK AND WHITE!

I don’t know if Nixon is protecting Obama or he just bowed down to a tyrant ……but, if Nixon had any guts he would have told Obama, he was governor of this state and he was Commander-in-Chief of the Missouri National Guard, not Obama.