Jay Nixon announced last evening, the eve before the case of Michael Browns shooting death went to the Grand Jury, that he wanted a “vigorous prosecution” and justice for the Michael Brown family.

What  the governor might as well have said is ‘We need to prosecute that cop to stop the protesters, give them what they want.’  Justice for Michael Brown, where’s the justice for Darren Wilson?   Jay Nixon, is looking out for Jay Nixon.    Governor, police officers vote too!   Did you stop to think, that officer Wilson may have feared for his own life, acted in self-defense?   You want to put a rope around Wilson’s neck, because you can’t deal with the lynch mob.   These people in Ferguson coming out every night now are no longer protesters but a lynch mob.   I’m not talking about the looters, they are your thugs taking advantage for theft and vandalism.   They aren’t there for Michael Brown.   The protesters that come out each night won’t be happy or go home until Wilson has been arrested.    That’s a lynch mob.

Governor Nixon has caved in, given in, because he doesn’t know what to do and has shown no leadership.     Law enforcement has lost the support of their Governor in the State of Missouri.   Nixon wants Wilson prosecuted, vigorously.    Nixon isn’t asking that the shooting is fairly investigated, he wants a prosecution.    This from a former attorney general of Missouri.  He knows damn well to prosecute you have to be brought up on charges first.   That hasn’t happened yet.

This is the governor of Missouri speaking.  He is trying to tilt the scale of justice in the direction that won’t upset the black community.
He is willing to sacrifice the life of a police officer only to appease.   Is this not the governor interfering with a police investigation?   The Governor is playing politics with a man’s life.

Nixon should let law enforcement do their job, for however long it takes.    He should stay out of the investigative process.

Governor; the definition of justice is:  1) the maintenance or administration of what is just, the administration of law, the establishment or determination of rights according to the rules of law or equity 2) conformity to truth, fact or reason; correctness.

The definition says nothing about appeasement.    Governor, it’s about doing what is right; that includes the rights of Darren Wilson.

The ISIS said they were coming to America.   This sign followed this reporter around Ferguson, keeping within camera view.  This is in line with the “ISIS we are here” sign in front of the White House just recently.   It is more likely this sign is for real and not just a protester being stupid.    Our southern border is basically open, with passage of illegals daily.   Obama has given our border little, if any attention.   Ferguson is prime picking for terrorists and a potential recruiting ground for the ISIS.

We make a big deal over a journalist being arrested in Ferguson during the protest, only to be released-but have little reaction to photojournalist James Foley’s beheading by the ISIS.   Obama released 5 terrorists in exchange for Bergdahl, a traitor.  What did he do for Foley?

People are becoming more divided when it is essential we come together.  Obama has done nothing to unite this country-he wants division.  The Black Panthers of all people call him a Muslim from Kenya.   The events in Ferguson plays right into the hands of Obama and his Muslim Brotherhood.  Obama relishes racial division.   He sends Attorney General Holder to find the truth in Ferguson.  Holder?  Holder is an Obama puppet.

Obama shows little concern of the threats against the United States from ISIS.   We must come together, we will have to defend ourselves, as you can not count on, had better not count on Obama.

One thing we have learned from the events in Ferguson: it does not take long for Americans to flood the streets quickly.   Someday soon we may need that same united effort to defeat attack on our nation, in our very own neighborhoods.

The ISIS threats against Americans are real! 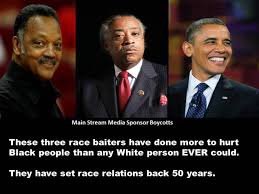 Al Sharpton and the Rev. Jesse Jackson, where are you now?   You show for the church rally, where you know it is peaceful.   You may march on the street during the day for the camera when peaceful.  Before it reaches sundown, you get the hell out of Dodge.   You know whats coming, as you are professional agitators.  Both of you should be arrested for instigating riots.

You pretend to be there for the people, but when they and the community of Ferguson would need you the most if you were who you pretend to be, you disappear.   You are there to place your mug before the national media.   You are as opportunistic as the thugs, criminals that come into Ferguson to loot.

You preach and demand justice for your people, but you don’t stand with them, too risky for you, afraid of getting tear gas stains on those rich suites?

The only service you provide is self service…..you do not serve the community of Ferguson or the black community anywhere.

Real civil rights leaders, just show up, they don’t announce they are coming, trying to create a fanfare parade entrance.   You are the fuel that ignites the fire.

Its on its off, its on its off………They have no idea what they are doing? They, starting with the Governor.