This is why they are called the liberal mainstream media. Spin it! Don’t report the story, make it. Protect the President from his stupidity.

1. NBC’s Brian Williams: Obama ‘Appeared to Be Clear and Unambiguous’ on ISIS

On Wednesday night’s NBC Nightly News, anchor Brian Williams ignored President Obama’s mixed signals regarding how his administration intends to deal with the threat of the Islamic terrorist group ISIS as he highlighted how Obama declared he would “degrade and destroy” ISIS, but omitted remarks from Obama that ISIS can be contained to the point of being “a manageable problem.” At the top of the broadcast, Williams delivered spin favorable to the White House’s wish to make Obama seem consistent with a definite strategy: “[F]or all those who may be wondering if the U.S. is going to rise up, take the bait and get into the fight to root them out, the answer today from both the President and Vice President appeared to be clear and unambiguous.” In contrast, the CBS Evening News noted Obama’s contradictions…

Arrogance of power –  most politicians possess it on all levels, but lets focus on elected and appointed federal officials.  We’ll use Hillary Clinton as the example.  No she isn’t an office holder now, and lets pray it stays that way…..but she has been and wants  your White House again.

At Dictionary.com, ” arrogance of power:  presumption on the part of a nation that its power gives it the right to intervene in the affairs of less powerful nations. ” This definition as you read, applies to a nation, and was first described by the late Senator J. William Fulbright during the Vietnam War.   Arrogance of power can be an attitude of one nation over another, much like an attitude within an individual.

“arrogance of power” — the sense that because one believes that one has superior resources, one can override opposition and ignore criticism. …  – Barack Obama come to mind?   We’ll get back to Hillary.

Merriam‑Webster defines “arrogance of power” as:  “an insulting way of thinking or behaving that comes from believing that you are better, smarter, or more important than other people … “.   There she is, Hillary!  Didn’t take long to find her.  I chose Hillary, because she is the Poster Child of arrogance.  Don’t believe me, ask the Secret Service…..’If you want to remain on this detail, get your f***ing ass over here and grab those bags!’  Hillary has quite the potty mouth.

Here is another arrogant quote from the power thirsty Hillary Clinton.   “We just can’t trust the American people to make those types of choices…. Government has to make those choices for people”  That was regarding healthcare.   (From the book “I’ve Always Been A Yankee Fan” by Thomas D. Kuiper, p. 20 – Hillary to Rep. Dennis Hastert in 1993 discussing her expensive, disastrous taxpayer-funded health care plan)   Read more at http://www.snopes.com/politics/clintons/hildabeast.asp#MTTJqSH8h0peXDT4.99

A quote from Hillary’s resignation good-bye speech on Feb. 2, 2013:   “I am glad to have contributed to making the world safer and fairer.”  This of course was following the Benghazi attack.  It doesn’t get anymore arrogant than that.   This, proof that Hillary Clinton is out of touch.   She was in over her head.

Hillary has many supporters within the Democratic Party, leftists with the mainstream media will swarm at her feet.   They will feed her ego and arrogance.    One characteristic that always escapes those that seek more power……..integrity.  Integrity and arrogance are opponents.

Managing cockroaches? Sounds like…. “Well, let’s keep just enough cockroaches around to eat our bread and crackers and crap all over our dishes, but not enough to carry off a bottle of liquor.”

You don’t manage cockroaches, Barrack. You exterminate them! Do it NOW! You have known about ISIS for over a year, and you have done NOTHING!! Skip the golf course and attend the daily intel brief. Enough people have lost their lives due to your incompetence. 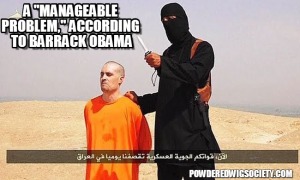 ISIS already works within the United States, their greatest ally resides at the White House, you know his name……Barack Hussein Obama.

We the United States of America, are without a president.   The Muslim Brotherhood and ISIS have  an ambassador to the U. S.  in Obama, and like any ambassador, his allegiance is to those he represents.  Obama’s interests is in Islam not the U.S.

Who is more destructive to our nation, Obama and his non-policy agenda, which is his hidden agenda or the ISIS?   Flip a coin!

It may be an older letter, but there is more truth in it now than when it was written.

You can count me in!  However, I never ever believed could lead.   We have no president.