This is something Hitler’s Nazi Germany would do! (Arlin Report comment) 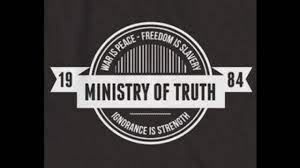 The revelation that the government had created a new board to fight “disinformation” prompted a slew of Nineteen Eighty-Four comparisons.

On Wednesday news broke that the Department of Homeland Security (DHS)—a department that didn’t exist 20 years ago but today spends $52 billion annually—had created a new “Disinformation Governance Board.”

The news comes just days after Twitter accepted Tesla-founder Elon Musk’s offer to buy Twitter for $44 billion, a move that critics of the dealclaimed could unleash disinformation. (Musk has been vocal in his support for free speech.)

DHS declined to be interviewed by theAssociated Press, but issued a statement after news broke of the development.

“The spread of disinformation can affect border security, Americans’ safety during disasters…