So, who is really the bad guy in this world mess? 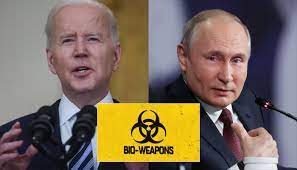 The Russian Defence Ministry on Thursday announced that theUS-funded biological labslocated in Ukraine were conducting experiments with bat coronavirus samples:

“According to the documents, the American side planned to conduct work on pathogens of birds, bats, and reptiles in Ukraine in 2022, with a further transition to studying the possibility of carrying African swine fever and anthrax”, chief spokesman for the Ministry of Defence Major General Igor Konashenkov said.

In addition, the facilities were studying the possible spread of pathogens via wild birds, migrating between Russia, Ukraine, and other countries in the region.

“The purpose of this – and other Pentagon-funded biological research in Ukraine, was to create a mechanism for the covert spread of deadly pathogens”, he added.

The Russian Defence Ministry will soon publish the documents received from staff at the Ukrainian biolaboratories, as well as the results of their examination, Konashenkov said.