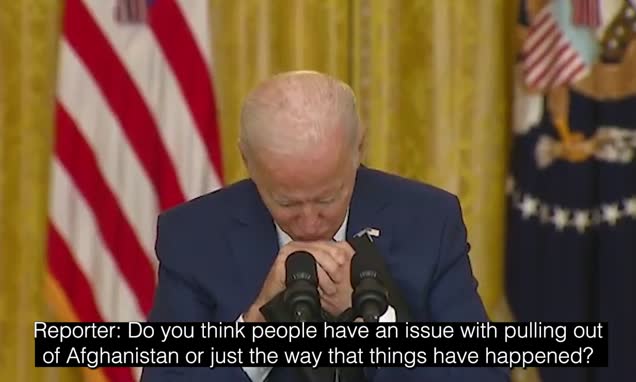 Joe Biden was filmed crumbling after he called on Fox News journalist Peter Doocy at a press conference, only to be accused of failing to answer Doocy’s question.

Biden, 78, looked lost for words after being asked if he bore responsibility for an ISIS-K suicide attack at Kabul Airport on Thursday that killed 13 US service personnel, before bowing his head and clutching a file tightly around his hands.

He did so moments after raising eyebrows by revealing he had been given a list of pre-approved journalists to call on, saying: ‘Ladies and gentlemen, they gave me a list here. The first person I was instructed to call on was Kelly O’Donnell from NBC.’

Doocy was the last journalist called, with Biden left tongue-tied after tried to throw a question back at Doocy about why Fox News was neglecting to mention that Donald Trump had confirmed the withdrawal when he…