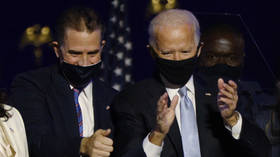 Hunter Biden has once again become the center of attention, this time thanks to an alleged gun-related incident in 2018 in which the Secret Service unofficially intervened on behalf of the now-president’s son.

The incident in question involved both Hunter and Hallie Biden, who had previously been married to Joe Biden’s other son, the late Beau Biden, and who had subsequently dated brother Hunter for a period of time.

A new report by Politico claims that in October 2018, Hallie searched Hunter’s vehicle for a gun because of unspecified“suspicions”she had. After finding a .38 revolver, she took it to a local grocery store, wrapped it up, and threw it in a trash can.

Upon informing Hunter of what she had done, he told her to go back and retrieve it, according to Politico, which obtained the police report from the incident.