Biden’s administration has created a worsening by the day crisis that they may not have anticipated to be so massive due to their own liberal ignorance. Something that was to be challenging is now out of control, and they have no clue what to do. They won’t admit their wrong, by closing it down and finishing the wall. No Joe will just say please don’t come now! He already created this land tsunami. Illegal aliens are not going to stop coming or turn around. Once started they are on the way. Joe’s words are weak. I don’t believe the administration is even sincere on stopping the storm or even slowing it down. The more that come and infiltrate our country the better for their agenda of destruction, economically and in every other sense. But as Republicans will say as there aren’t many fighters among them, “it is what it is, we have to just accept the cards we have been dealt”. I mean they haven’t lived up to a stolen election. Few in D.C. stand up for our rights and constitution. (Arlin Report comment) 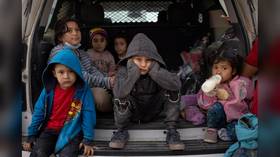 Child migrants take shelter from the rain in the back of a US Border Patrol vehicle on Sunday after crossing the border into Texas.©Reuters /Adrees Latif

One of President Joe Biden’s latest tactics in dealing with a growing flood of illegal aliens – especially unaccompanied child migrants – is reportedly to muzzle Border Patrol agents, banning them from speaking to reporters.

Biden’s administration has verbally passed down an unofficial“gag order,”NBC News reported on Wednesday, citing two current and two former US Customs and Border Protection (CBP) officials. CBP agents and section chiefs are essentially banned from speaking to media outlets and have been instructed to deny all requests from journalists for ride-alongs.

Those who are allowed to speak can only use“approved…