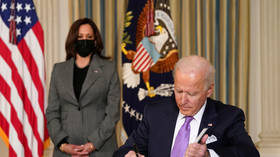 As many Americans believe someone other than President Joe Biden is making the important day-to-day decisions in the White House as believe Biden’s the man in charge, according to a recent Rasmussen poll.

Just 47% of American voters believe President Joe Biden is actually calling the shots regarding his presidential duties, according to aRasmussen pollpublished on Tuesday. That’s the same number of respondents – 47% – who believe other officials, like Vice President Kamala Harris, are making those decisions behind the scenes.

The poll results certainly raise an eyebrow or two, given the widespread discussion of Biden’s mental state ahead of November’s election. Rumors that the 78-year-old politician – the oldest man to be elected president in US history – suffered from…

One thought on “Biden bait & switch? Almost HALF Americans think someone else is making the president’s decisions — RT USA News”