The lawmakers from the period 30 years following the Civil War obviously approved of these statues. If anyone had reason to feel otherwise it would be them. There was a reason for their approval, for history and to bond back together. 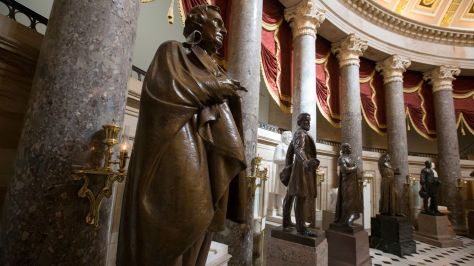 12 Confederate Statues were placed in the National Statuary Hall in Washington, D.C. 30 years after the Civil War and Congressional Democrats, like Nancy Pelosi and Steny Hoyer, who have been there for decades, are just now calling for their removal?

The House will vote next week on legislation to remove statues in the Capitol of people who served in the Confederacy or who otherwise worked to uphold slavery, Majority Leader Steny Hoyer (D-Md.) announced Monday.

Lawmakers will vote next Wednesday on a bill that Hoyer unveiled on Monday with five senior members of the Congressional Black Caucus (CBC).

“It is reprehensible that individuals who did so much to divide our country and dehumanize African Americans are honored in the halls of Congress,” Hoyer said in the statement. “I hope all of my colleagues on both sides of the aisle will join us in supporting this bill to…