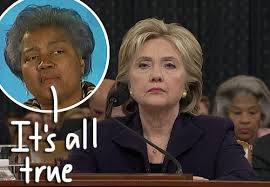 The Democratic National Committee (DNC) and the Clinton Foundation, did they become one and the same?  With Hillary Clinton controlling them both, controlling/laundering money only Clinton would benefit.  Tom Perez, officer in name only!   Look how easily Hillary controlled and manipulated Debbie Wasserman Schultz.

Hillary Clinton easily the ruler of, queen of the DNC got her way.   DNC money spent under her thumb.   It paid for a FAKE dossier against Donald Trump.   (Ge’ez in the future Hillary at least be smart enough to find someone a bit cheaper to prepare ridiculous false documents.  YOU after all have no problem with-in your Clinton Crime Cartel finding people to do your scum work).  Hillary would not have spent money from her own purse for something the DNC (and her campaign……was there a difference) would be quite willing to cover.  That kind of dough doesn’t disappear without many folks being aware of, though they attempt to HUSH!

Anything and everything Hillary Clinton is connected with that has a bank account has  corruption rolling through it.  From what I understand, Hillary and the DNC use the same bank in NY.   How convenient, easy to transfer money, or not……….keeping it from the name of Hillary but using for/spending for everything Hillary.   Seems like easily proven trails of money laundering, if not extortion and embezzlement.

Hillary knows a lot about the people around her, those in her circle.   That would include the DNC.  She knows/has dirt on them………she knows what they do, what their roles are.  They were placed within the circle with purpose.   Surround Hillary, protect Hillary…….then when the flashlights come spying at night, lie for Hillary.   Hillary’s vantage point, squeal on me, I ruin or have you killed.  No folks that is not a conspiracy nuts crazy talk.   It happens, has happened.  They’ve covered up one murder of one of their own already, just ask Donna!

The DNC, the Clinton Foundation ………..controlled by Hillary are one and the same, only thing is: everything with Clinton’s name on it is Hillary’s, everything DNC is Hillary’s.   She thinks the C means Clinton.    Money is Hillary’s power……what she always has and will surge to gain more.   Sitting on a throne in the WH was to be a bonus, placing herself in a position for more deals, that Hillary would only benefit, not the U.S.   Thank God, the witch LOST.

The Dems have a serious internal problem……..how to get rid of a rodent named Hillary.