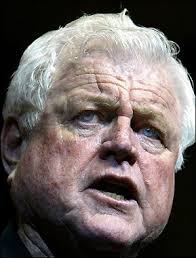 From former U.S. Senator Howell Heflin of Alabama regarding a photo of fellow Senator Ted Kennedy caught with another lady (or two) on a yacht off the coast of southern France:

“Well, I do declare! Ha! Why, it do look to me like Senator Kennedy done changed his position on offshore drilling.”

3 thoughts on “ARLIN REPORT QUOTE OF THE DAY”