We don’t protest the bully in the White House, but we absolutely should.

Michael Brown was simply doing in a smaller way what the bully in the White House is doing to ALL Americans (conservative and liberal).  Hopefully the new Congress will stop the bully when convened in 2015 for it is simple; follow the Constitution.

You can not get justice from a Justice Department that is as injust as those they investigate. 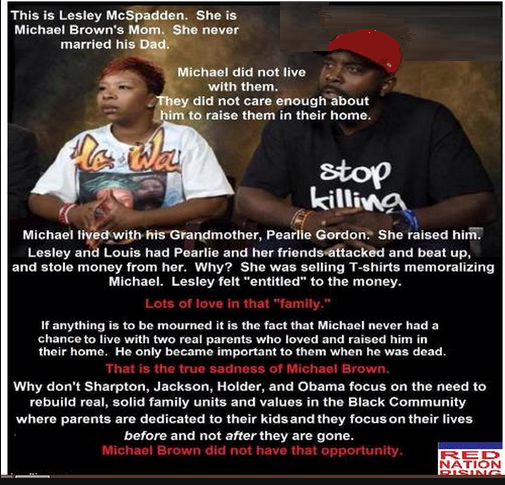 This is how I see it, and is my opinion, which I am expressing here, all within my freedom of speech.

There are many opportunists in Ferguson, Missouri these days, none greater than those who should be the most caring.  Twisted truth started long before that early afternoon on August 9 of this year, when Michael Brown was killed by a police officer, during a physical confrontation.

Michael Brown was a bully, as we saw on the convenience store video.   Sorry folks, pictures, especially motion pictures, do not lie.  Behavior is learned, starting at birth.   From some of the actions we have learned from Lesley McSpadden in particular, Michael had a good teacher.

It is sad a young man died so early in life.  Michael’s grandmother Pearlie Gordon was possibly the only positive caring adult in Michael’s life, that gave him a chance to make something of himself.  We won’t ever know how much of an influence Pearlie really made.

Michael’s mother is being investigated for attacking and stealing from members of her own family.   Lesley McSpadden is not the caring mother she has so pretended to be, she is an opportunist.  Lesley is no different from the rioters, looters and arsonists in Ferguson.  Lesley learned somewhere in her own life how to milk the system, society.

Michael Brown’s destiny began long before he met then Officer Darren Wilson.   The real story, one young life is dead and another’s ruined; and their path began 18 years ago.

Okay, Holder, along with Obama and Gruber the guber……….really must think the American people are stupid. I am betting we are not stupid enough to believe his policy will ‘End Racial Profiling’. Really? Holder just suddenly came up with this Master Plan……right out of his hat. ROLMAO

By the Blood of the Lamb

This is great stuff…If you need to roll in laughter, here is your chance.

This is the type of future activity we can expect to see in the West and that includes the U.S. Muslims are committed to destroying all non-Muslims. The number of Muslims in our country goes up each day…….do the math. Obama’s immigration policy isn’t just about Mexicans. Obama is Muslim. He shares their belief and goals. Destroy America. We need to wake the hell up, shut the border down…..and remove all threats.

As a St. Louis Rams season ticket holder I was in attendance for Sundays game against the Oakland Raiders.   I did not learn of the five player’s “hands-up don’t shoot” gesture in support of protesters and rioters in the Michael Brown Worldwide Spectacle until well after the game.  I was not paying attention to the beginning of the introductions when they came on the field, I only saw them shortly after they had dropped their arms.   I know their hands were up, the photo is proof.  To the five players, gentlemen, what proof do you have that Michael Brown had his arms raised?  You have none!   The evidence presented to the Grand Jury indicated Michael Brown’s arms were not up.

Whether you agree with the Grand Jury decision or not; for the Rams players to demonstrate their support of the protesters was highly inappropriate as they were introduced before a crowd of fans.  The players are representatives of their team, the Rams organization.   They were at their place of employment, they were on the job, they were there to play football.   Are the fans to assume the Rams organization supports the position of the protesters?   They had five representatives making a statement.  If it is their personal feelings and expression, they should do it on their own time, not company time.  It was inappropriate and insulting to the police and security at the game.

Had I seen this demonstration, I would have walked out of the game, before it even started.

We pretend sympathy for dead thug Mike Brown. We want to control USA!

Ports like Oakland get blocked to extort the public into submitting to any lunatic cause. Highways are blockaded by mobs that don’t consider ambulances or emergency vehicles blocked. When will we see prosecution and rogue gallery of mug shots to single out the masked mob idiots? Atlanta dared to take a reasonable step.

This moron was hiding behind his mask and hauled in by Atlanta police.