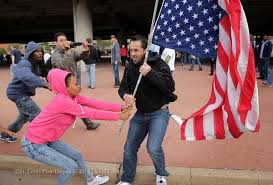 GIVE ME BACK THAT STOLEN FLAG!

Some St. Louis Rams fans have had enough of the Ferguson protesters.  Protesters were outside the Edward Jones Dome at the intersection of Broadway and Cole Street in St. Louis.

While some protesters did march peacefully, a handful of others were there to intimidate and spark confrontations with fans as they left the game between the Rams and Seahawks Sunday October  19th.   The protesters only interested in stirring the pot of racial and violent reaction were not disappointed.   There were reported incidents of fans and protesters spitting on one another; of course each side blaming the other.

Protesters intimidated by shouting and getting in the faces of some fans.   One fan angered by the American flag being flown upside down, grabbed the flag and ran.   Protesters caught up with the flag rescuer only to wrestle for its possession.   Punches were thrown during some of the struggles and two individuals are sporting black eyes this morning.  Two arrests were made, one of a female protester wearing a black tee-shirt with F_ _ K THE COPS on the front.   Really a nice demonstration  for children to see while attending a sporting event!!!   This only shows the stupidity of some and where this come.

THIS IS NO LONGER ABOUT MICHAEL BROWN