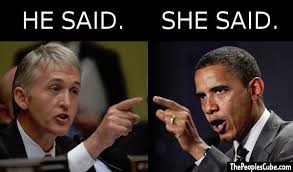 Many bloggers are throwing the name Trey Gowdy around for a possible replacement of Eric Holder for Attorney General.   While I believe he would be an outstanding choice, Obama doesn’t make outstanding decisions.  Even though I doubt Obama cares what his fellow democrats think, I don’t see him making this appointment; it could possibly backfire on the POTUS.

Trey Gowdy is a conservative Congressman from the 4th District of South Carolina.  Rep. Gowdy strongly believes in accountability and limited government while upholding the constitution.  Trey Gowdy represents everything Barack Obama does not.  The former southern prosecutor would take his position as AG seriously; he would not be in Obama’s pocket.  Gowdy would hold all accountable, including and especially the president.   Besides, heat is already coming from Gowdy on Obama and Hillary Clinton as Chairman of the House Select Committee on the Benghazi Attack of 2012.   Obama is not going to put himself in an uncomfortable position, unless he really wants his enemies closer.  On the other hand, would Obama take a chance, appoint Gowdy as AG to get him off the Select Committee?   Interesting thought?   Would the good congressman even accept the appointment?   I would bet ……….no.

Side point:  Why does it seem that so many of Obama’s appointees quit when there is heat on them?  Could it be because there is smoke and where there is smoke……….well you know.

Our nation is searching for someone to trust, with principles, morals, integrity, loyalty to “our” country, a common sense patriot, most of all a leader.   I would like to see this southern gentlemen challenge the other Republicans in 2016 as a presidential candidate.  Lets see how he matches up, personally I believe he would do quite well.  He is definitely intelligent and won’t back down.  I know he is the last person Hillary wants to deal with.

To learn more about Rep. Trey Gowdy check out the links below.  I’d like to hear your thoughts?

3 thoughts on “TREY GOWDY VS. OBAMA and HILLARY”